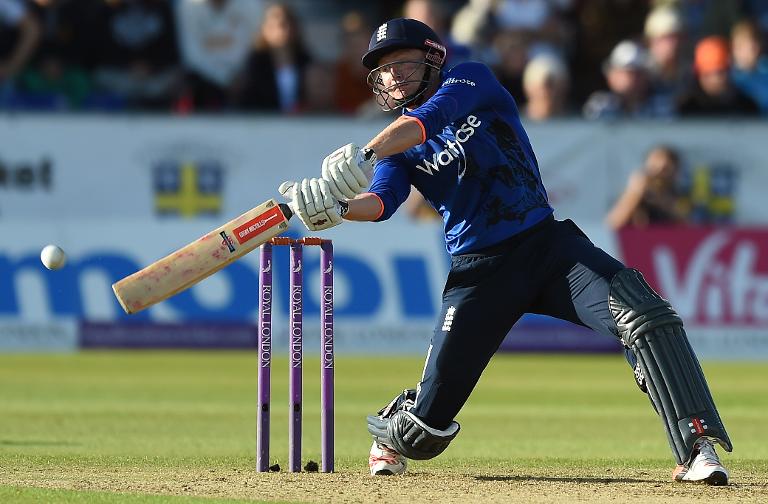 Jonny Bairstow proved an ideal stand-in as his unbeaten 83 saw England to a 3-2 series-clinching win over New Zealand in the fifth one-day international at the Riverside on Saturday.

England, chasing a revised target of 192 in 26 overs, collapsed to 45 for five, with left-arm spinner Mitchell Santner taking three wickets for four runs in seven balls.

But Yorkshire wicket-keeper/batsman Bairstow and Sam Billings (41), turned the tide during a sixth-wicket stand of 80 in 57 balls.

Adil Rashid (12 not out) then helped Yorkshire team-mate Bairstow complete victory for a new-look side with an unbroken stand of 54 in 29 balls.

England finished on 192 for seven, with six balls to spare, in a three-wicket win under the Duckworth/Lewis method.

Man-of-the-match Bairstow, only called into the squad on Friday after first-choice keeper Jos Buttler suffered a hand injury, faced 60 balls including 11 fours, during his maiden ODI fifty.

“To make a contribution is fantastic,” said Bairstow.

“The way the guys have gone about their business in this series is wonderful.”

England captain Eoin Morgan praised Bairstow’s knock by saying: “In what was probably our worst batting display of the series he stuck his hand up and won us the game.”

It was all a far cry from the World Cup, where England’s first round exit included an embarrassing eight-wicket defeat by New Zealand.

This series saw England and New Zealand set a new aggregate runs record of 3,151 for a five-match ODI campaign, surpassing the total of 2,963 shared by India and Pakistan in 2003/04.

“Some of the cricket we’ve seen over the last five games is nothing short of sensational,” said New Zealand captain Brendon McCullum.

Having seen England leg-spinner Rashid prosper during New Zealand’s innings, McCullum took the unusual step of deploying Santner as one of his opening bowlers.

Santner struck with his second ball when Alex Hales (one) was superbly caught by a leaping Kane Williamson at square leg to leave England eight for one.

He then had Joe Root (four) stumped by Luke Ronchi despite the wicket-keeper initially fumbling the ball, which struck his chin, before completing the dismissal.

Ronchi needed prolonged treatment before the next ball saw Morgan caught in the deep for a duck.

Jason Roy survived the hat-trick but Ben Stokes (17), on his Durham home ground, drove Ben Wheeler to McCullum at mid-off.

And when debutant Andrew Mathieson struck with his first ball, Roy’s limp shot caught by Martin Guptill, running round from backward point, England were in dire straits at 45 for five in the ninth over.

But Bairstow and Billings, who slog-swept Grant Elliott for a huge six, got England back into the match.

Their partnership ended when Billings’s mishit pull off Matt Henry was caught by a diving Ross Taylor at short mid-wicket.

He was dropped on 39 by opposing keeper Ronchi after getting an inside edge off Ben Wheeler.

And he was missed again on 56 when Santner, albeit he was looking into the sun, fumbled a chance at third man following Bairstow’s uppercut off Henry.

Bairstow and Rashid got the target down to 17 off 12 balls, at which point Bairstow struck Mathieson for two successive fours through the covers.

Bairstow, in blazing sunshine, sealed victory with two off Mathieson.

Earlier, New Zealand made 283 for nine in their full 50 overs after losing the toss.

Guptill top-scored with 67, man-of-the-series Kane Williamson made exactly 50 and Ross Taylor added 47 before Wheeler bolstered the total with a rapid 39 not out.

Stokes took three for 52 and Rashid two for 45.

Rashid’s figures came after his eight overs in England’s seven-wicket win at Trent Bridge on Wednesday cost an expensive 75 runs.

He bowled Santner (two), who struck him for four sixes in an over on Wednesday, before Elliott was stumped by Bairstow after failing to spot Rashid’s googly.