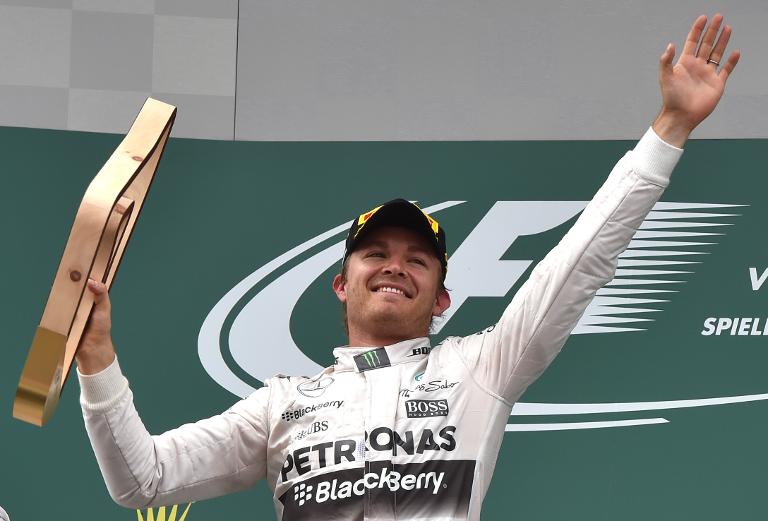 Nico Rosberg claimed his third win in four races when getting the better of his Mercedes teammate Lewis Hamilton in Sunday’s Austrian Grand Prix which was marked by a spectacular crash involving two former champions.

As Rosberg celebrated cutting into Hamilton’s world championship lead, Fernando Alonso and Kimi Raikkonen were relieved to walk away unscathed from their opening lap smash.

The race began in dramatic fashion, Rosberg diving into a first corner lead ahead of pole sitter Hamilton.

Almost immediately after, Alonso’s McLaren landed on top of Raikkonen’s Ferrari, causing the Safety Car to be introduced.

Both drivers walked away from the debris shaken but miraculously unharmed.

Alonso was required to undertake a medical examination after which he said: “It was obviously quite scary.

“The start was very good. Kimi had a lot of wheel spin out of turn two. We were overtaking him and he lost the car on the left.

“I was on the left. I could not see anything. I looked in the mirror and saw a car under my car. I jumped quickly to see he was OK. I saw he was — and so I was happy.”

Race officials investigated the incident but decided to take no action.

For Rosberg, meanwhile, this result was a perfect early present ahead of his 30th birthday next Saturday.

The German was repeating his 2014 success when he came home a comfortable 3.8 seconds clear of Hamilton to eat into the defending champion’s lead from 17 to 10 points at the top of the drivers’ standings.

After eight of this yearâ€™s 19 races, Hamilton, who picked up a five seconds penalty, has 169 points and Rosberg 159. This was Rosbergâ€™s third win of the season and the 11th of his career.

“The start made the race. It was a great start and I managed to defend in the first couple of corners. I was really happy with the car and to see the gap open up to Lewis.”

“Nico did a fantastic job today. He was quicker during the race. I had a bad start which lost me ground and in the second stint it was just about making the distance, so that’s what we tried to do.”

Hamilton led briefly during the pit stops and that enabled him to equal the 45-year-old record set by Jackie Stewart of leading 17 successive Grands Prix.

Felipe Massa came third, 17 seconds adrift of the two Mercedes men, six-tenths of a second ahead of four-time champion Sebastian Vettel of Ferrari, Valtteri Bottas in the second Williams and Nico Hulkenberg, who one week after winning in the Le Mans 24 Hours race, finished sixth for Force India.

It was the 40th top-three finish of Massaâ€™s career and he was clearly delighted as he joked with former Ferrari and McLaren driver Austrian Gerhard Berger on the podium.

For Vettel, fourth was disappointing after the German had topped two of the three practice sessions.

“â€œThe car was feeling good, but the others were able to find a little bit more

“Mercedes was able to run their high power mode â€“ their qualifying mode, so to speak â€“ more often in the race and it was too much for us.â€

Pastor Maldonado was seventh for Lotus ahead of Dutch teenager Max Verstappen of Toro Rosso, Mexican Sergio Perez in the second Force India and Daniel Ricciardo, who picked up a point for Red Bull, after starting down the grid.

It was another hugely disappointing day for the struggling McLaren-Honda team.

On top of Alonso’s first lap crash, Jenson Button had to make an early retirement in the other car with engine problems.