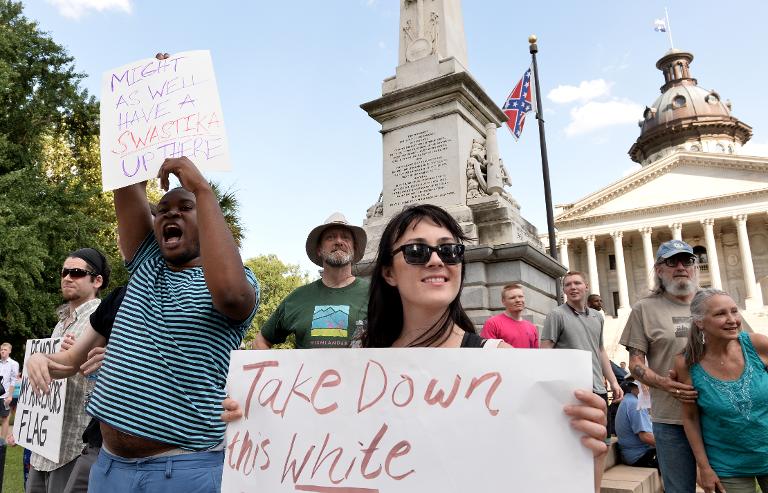 Several thousand protesters gathered under the controversial Confederate flag at South Carolina’s state legislature, demanding it be taken down in response to the Charleston church massacre.

Waving placards, chanting “take it down” and singing “We Shall Overcome,” the youthful crowd, black and white, condemned the Civil War saltire as a symbol of lingering racist sentiment in the American South.

“We can no longer afford to let that flat stand there” and be a beacon for those who harbor “bad opinions,” said one of the speakers, 95-year-old lawyer and activist Sarah Leverette, prompting loud cheers.

Organizers called the event a “warm-up” for what they hope will be an even bigger anti-flag protest, also in front of the colonaded State House, on the Fourth of July holiday.

Online, more than 370,000 people as of late Saturday had put their name to a petition launched by the left-leaning MoveOn.org activist group, calling for the flag to go.

“Symbols of hate have no place in our government. The Confederate flag is not a symbol of Southern pride but rather a symbol of rebellion and racism,” it said.

On the heels of the Charleston shooting, “it’s time to put that symbol of rebellion and racism behind us and move toward healing and a better United States of America!”

The flag’s 24/7 presence — alongside a memorial to Confederate war dead on the lush green State House lawn — has been a point of friction in South Carolina for years.

But it became a flashpoint once again after a young white male walked into a bible study class at the historic Emanuel African Methodist Episcopal Church in Charleston and shot dead nine African-Americans.

One of the dead was chief pastor Clementa Pinckney, who was also a state senator, yet the flag — unlike others — was not lowered to half-staff after the shocking massacre that has renewed debate about racism and gun violence in America.

Dylann Roof, 21, from the Columbia area, has been charged with nine counts of murder in connection with the bloodshed, which authorities have described as a hate crime.

Police on Saturday were investigating a racist online manifesto that appeared on a website that also carried pictures of Roof with the Confederate flag and a handgun.

Supporters of the Confederate flag embrace it as a symbol of Southern pride and heritage, and officials say removing it from the State House grounds requires by law a decision by the Republican-dominated legislature, now in summer recess.

Governor Nikki Haley, a Republican who enjoys Tea Party support, has refused to call a special session to address the issue, saying emotions are still too raw in the wake of Wednesday’s bloodbath.

Last year Haley, whose parents are immigrants from India, defended the flag on the State House lawn, saying it wasn’t an issue because no corporate CEO had ever complained about it.

Yet even some of her influential fellow Republicans were on the other side of the argument. Former Republican White House hopeful Mitt Romney tweeted “it’s time to take down flag in SC.”

And current Republican presidential candidate Jeb Bush echoed that saying in his own tweet that as governor he took it down in Florida, and put it in a “museum.”

Will Green, a young African-American activist in Columbia, said the flag encouraged neo-Nazis from out of state to come to South Carolina, but discouraged investors and graduate students from moving to the state.

“This flag is lying about us, our state and the kind of people we are,” Green, who described himself as “a son of the South,” told the crowd.

“We have to take Southern pride out of the hands of racists and haters,” he added. “It’s not just about dead Confederates. It’s about us.”