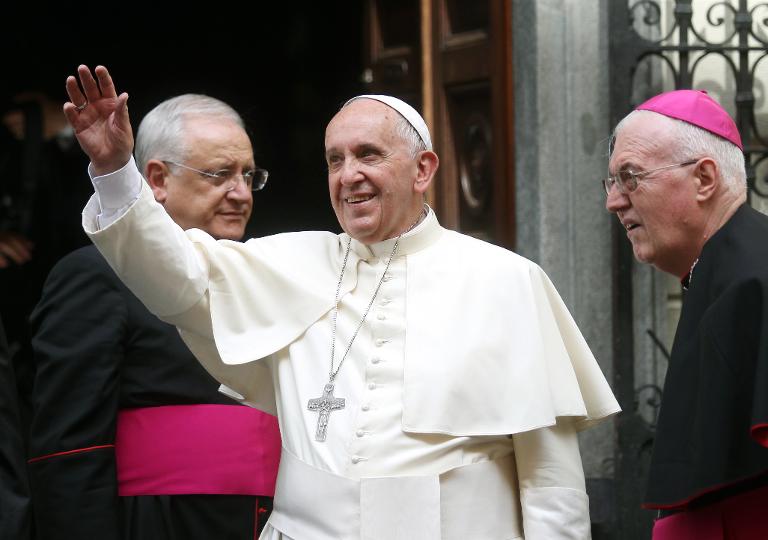 Pope Francis said Sunday the plight of asylum seekers hoping for a new life in Europe was enough to make him cry, condemning those who treat them “like merchandise”.

Speaking during his first pastoral visit to northern Italy, the pontiff slammed hostility towards migrants arriving by boat from Libya, with European countries bickering over who should be forced to provide shelter to the needy.

“It brings tears to one’s eyes to see the spectacle of these days, in which human beings have been treated like merchandise,” he told the crowds.

He was speaking as Italian Prime Minister Matteo Renzi met his French counterpart Francois Hollande in Milan to discuss the immigration crisis which has seen hundreds of migrants blocked on the border between the two countries.

The head of the world’s 1.2 billion Catholics was in the industrial city in the northwest of the country for a two-day visit which saw him spend time with the poor, sick and marginalised, including prisoners and migrants.

Francis, whose father grew up in the city, was in Turin to pray before the mysterious shroud, believed by Christians to be the burial cloth of Jesus but held by sceptics to be a medieval fake.

Sitting before it in silence in the city’s cathedral, Francis remained with his head bowed in prayer before rising to contemplate up close the linen cloth which bears the faint image of a man who appears to have died by crucifixion.

Radiocarbon dating in 1989 declared the 14 by four foot (4.2 by 1.2 metres) cloth, which has traces of blood and DNA on it, to be around 700 years old. But if it is a fake, international experts have failed to discover how it was made.

The Church sidesteps the issue by calling the venerated cloth a religious icon.

The shroud “encourages us to consider the faces of everyone who suffers and is unjustly persecuted,” the pontiff said during his Angelus prayer.

In Italy, criminal networks have been preying on refugees, exploiting them to pocket government subsidies, while the northern regions in particular have begun closing their doors to asylum seekers.

Francis warned people not to blame those fleeing war and famine for economic difficulties, insisting that “if immigration increases competition (for jobs), they cannot be blamed because they are victims of injustice… and wars”.

Nor should locals turn their backs on their own poor, elderly and unemployed, he said, pointing out that 10 percent of the region lives in poverty, while 40 percent of young people are jobless and the elderly feel abandoned.

“We are called to say ‘no’ to the idolatry of money,” which pushes people to try by any means to get rich despite the crisis, “without caring for the many getting poorer, sometimes to the point of hunger,” he said.

The trip will have a special personal element for Francis, who is set to meet members of his extended family for lunch on Monday.

The pope’s grandfather Giovanni Bergoglio and grandmother Rosa Margherita Vasallo lived in Turin before moving to Buenos Aires in 1929 when their son, Francis’s father Mario, was 20 years old.

During a mass in the city’s vast Vittorio Square, the Argentine’s voice caught with emotion when he cited verses by Nino Costa from the poem Rassa Nostrana — which speaks of Piedmontese people who emigrate — which were taught to him by his grandmother in the local dialect.

His prayers for “this blessed land, of which I am a grandson” were met by huge cheers from the 60,000 or so faithful present, many of whom whooped with excitement as Francis set off around the square in his open-topped pope mobile.

The pontiff is expected to meet with disabled people and the young before the end of the day, while Monday will be largely dedicated to visiting his relatives.