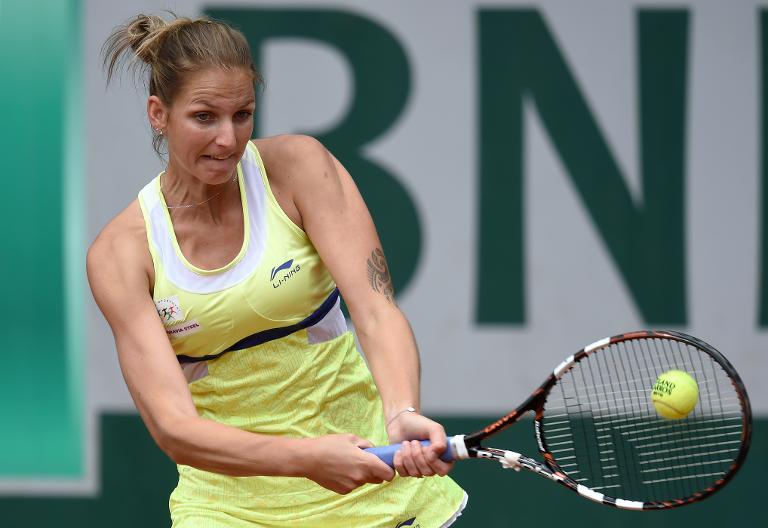 Karolina Pliskova, the six-foot one-inch Czech, is on the brink of the worldâ€™s top ten after beating both the rain and the weekâ€™s greatest giant-killer to reach the Birmingham final on Saturday.

Pliskovaâ€™s 6-2, 7-6 (8/6) much-interrupted win over Kristina Mladenovic, the unseeded French player who had downed three seeds, carried her to her first grass-court final, giving her the chance of climbing to another elite landmark.

Already the youngest player in the top 12, the 23-year-old will take Angelique Kerberâ€™s number ten ranking if she wins Sunday’s final against the German, whose game looked in good order as she outplayed compatriot Sabine Lisicki 6-3, 6-3 in the other semi-final.

However Pliskova might not have made the final had she not produced some brave blows while saving three set points during the second set tie-break.

She also summoned much resilience to deal with three rain delays lasting two hours and 20 minutes in total during a match just one hour and 20 minutes long.

â€œI was used to all that because I had it in my first match,â€ said Pliskova, whose second day required her to complete two matches in order to catch up with the weather-affected schedule.

As if in retribution for her comments, the rain returned mid-interview with extra force, requiring ground staff to heave the court covers around her feet and bring her victory speech to a premature end.

Pliskova had though given an accurate summary of what had happened.

â€œI was shaking (at the end),â€ she said. â€œShe (Mladenovic) played better in the second set than the first, and a third set would have been very tough.

â€œThe end of the match was key. I was trying to stay calm and to centre on every point and to hold serve.â€

Mladenovicâ€™s performance contained elements of that which accounted for the top-seeded Simona Halep the previous day -â€“ a rather slow start, gradual improvement in the timing of her ground strokes, and an admirable obstinacy when it came to the big points.

Unfortunately her early break of serve in the second set was countered immediately by Pliskova, and even more unfortunately she began facing three match points at 6-3 in the tie-break with drizzle already beginning to return for a fourth time.

Despite defeat, Mladenovic may be rewarded with a leap in the rankings from her current 43 to somewhere beyond her career-best 36.

Lisicki delivered a record 27 aces on Wednesday and had reached a total of 45 in three matches before encountering the resilient Kerber. This time Lisicki was allowed only three.

Moreover her serve was broken early, in the third game, and then twice more without reply.

Once she had returned the ferocious delivery, Kerber often did damage with her left-handed forehand as she pummelled Lisickiâ€™s backhand corner.

If Kerber wins on Sunday it’ll be her fourth tour title and she’ll stay in the top 10 — keeping Pliskova out.

Kerber and Pliskova are level at 2-2 in their head-to-head meetings though Pliskova has won their last two.

“I think Karolina will be a similar game to Sabine,” Kerber said.

“She plays very well, very tough, deep and strong. But again, every single match starts from zero, and it’s another day and another match.”