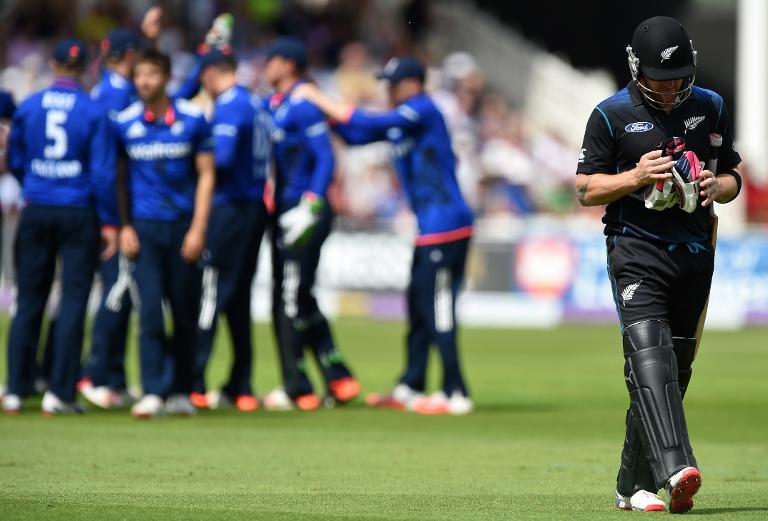 New Zealand captain Brendon McCullum said he would take some time to decide on his one-day international future after the dramatic climax to a 3-2 series loss in England.

The 33-year-old McCullum has a longstanding back complaint and there has been speculation that, after 254 matches at this level, he could miss New Zealand’s limited overs-only tour of Zimbabwe and South Africa in August with the aim of giving heir apparent Kane Williamson more captaincy experience.

Having led New Zealand to a maiden World Cup final on March 29 where they suffered a seven-wicket defeat by Australia in Melbourne, McCullum may decide he has few more peaks left to climb in the one-day game.

“I don’t know. We’ll wait and see,” said McCullum when asked about his one-day future after England’s three-wicket win in a rain-affected clash at Chester-le-Street on Saturday gave the hosts a 3-2 victory in the five-match series.

“We’ll let the dust settle on this. It’s been a great year, an incredible summer for us.

“We’ve scaled some heights that hadn’t been done before by our country and we’re starting to build a soul to how we play.”

The dynamic opening batsman added: “I’m lucky enough to be in a position of leadership to give guys the freedom to play that brand.

“I’ve enjoyed the last two years. The body’s a bit sore but we’ll see what happens.”

Had New Zealand had the likes of left-arm paceman Trent Boult, currently sidelined with a back injury, in their side in Durham, the outcome of Saturday’s thrilling finale may well have been different.

England, set a revised target of 192 in 26 overs under the Duckworth/Lewis method after a rain delay of some three hours between innings, were in dire straits at 45 for five after McCullum’s decision to open the bowling with Mitchell Santner was rewarded by the novice left-arm spinner taking three wickets for four runs in seven balls.

But Jonny Bairstow, only summoned into the squad on Friday after first choice wicket-keeper Jos Buttler split the webbing of his left hand, produced an unbeaten 83 off 60 balls, including 11 fours, as England won with an over to spare.

New Zealand, in overcast conditions, had earlier made 283 for nine after being sent into bat by England captain Eoin Morgan with opener Martin Guptill, while man-of-the-series Williamson took his tally for the five matches to 396 runs with an innings of exactly 50.

Santner’s final figures of three for 31 were a career-best for the 23-year-old and McCullum was also encouraged by the progress of other emerging New Zealand players such as Ben Wheeler, Matt Henry and Andrew Mathieson, who made his ODI debut on Saturday.

“We’ve been lucky enough through the series to be able to introduce some people to international cricket, and you can’t help but think there’s going to be a whole lot of learnings from this series,” said McCullum.

McCullum said that while Williamson and fellow batsman Ross Taylor had been “outstanding” during the series, other core members of the World Cup squad, including himself, hadn’t been at their best.

“As whole we probably just weren’t quite there, and there were some key players — myself included — who just weren’t quite where we needed to be to continue the momentum that we built up through that World Cup,” explained McCullum, bowled for six by Steven Finn on Saturday.

At the World Cup, New Zealand thrashed England by eight wickets but found themselves up against a transformed one-day team this tour.

England are the hosts of the next World Cup, in 2019, and McCullum said: “I think England’s an exciting group — fast-forward four years, provided they stay true to that style, they’ll be a dangerous team.”

New Zealand’s tour concludes with a one-off Twenty20 international against England at Old Trafford in Manchester on Tuesday.