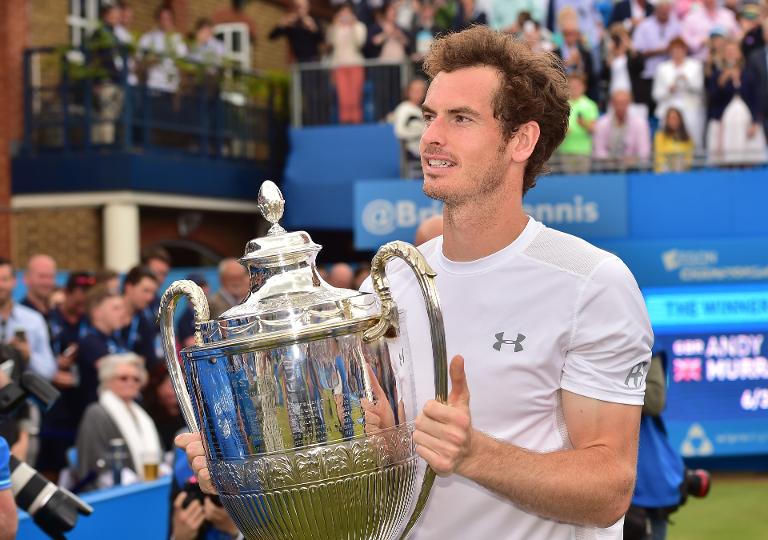 Murray joins John McEnroe, Boris Becker, Andy Roddick and Lleyton Hewitt as the only four-time winners of the Wimbledon warm-up event in the Open era.

It is Murray’s third ATP title of 2015 after his victories on clay in Madrid and Munich, earning him a cheque for 381,760 euros ($433,507) and continuing his superb form since his April wedding.

With 34 career ATP titles, including six on grass, Murray moves up to 18th on the Open era list — level with Arthur Ashe, Michael Chang and John Newcombe.

Even more significantly, it is the world number three’s first title on grass since his historic Wimbledon triumph in 2013.

That career-defining success two years ago came after his third victorious campaign at Queen’s and, with Wimbledon just eight days away, Murray’s ruthless 64-minute rout of the world number 17 shows he is in the mood to mount a sustained challenge for a second All England Club crown.

“I played better as the week went on. I came up with some great shots today and I had to play that way if I wanted to win,” Murray said.

“You want to go into Wimbledon with grass matches under your belt. I’m playing better than I did in 2013 but it’s extremely difficult to win these events.”

Anderson added: “Andy is a terrific player. It’s tough playing him here, but I can take a lot of positives from this week.”

After heavy rain forced his semi-final against Serbia’s Viktor Troicki to be suspended on Saturday, Murray knew he would have to do double duty to win the title.

The 28-year-old completed the first part of his hectic schedule in just over an hour, dispatching Troicki 6-3, 7-6 (7/4) before heading back to the locker room for two hours’ recovery time.

Anderson was well rested after blitzing his way into his first Queen’s final with 34 aces against Gilles Simon on Saturday to take his tally for the tournament to 96.

But Murray had won four of his previous five meetings with the 6ft 8in (2.03m) South African and maintaining his 100 percent record in Queen’s finals proved no problem.

Murray had already won twice in one day this year, seeing off Lukas Rosol and Roberto Bautista Agut to clinch the Munich title last month.

And there was no sign of any fatigue as the Scot made a dynamic start, unloading crisp ground-strokes and reading Anderson’s serve well enough to secure two break points in the fourth game.

Anderson turned to brute force in response, slamming down a 141mph (227kmph) serve, but Murray managed to keep it in play and the rattled South African lost his cool as he buried a mistimed smash into the net.

That was all the incentive Murray needed and he kept Anderson completely out of sync with his astute use of drop shots before one whipped forehand cross-court winner that bent away from his opponent as if on a string.

Anderson reached 100 aces for the tournament before the set was over, but Murray was never seriously troubled as he closed it out with a perfectly measured backhand slice.

Anderson could sense his hopes of becoming the first South African to win Queen’s since his childhood idol Wayne Ferreira in 1992 were starting to slip away.

The 29-year-old had lost six consecutive finals since winning his second ATP title at Delray Beach in 2012, and Murray ensured his opponent’s barren sequence continued as he pressed home his advantage with a break in the fifth game of the second set.

Again it was a Murray drop shot that did the damage, catching Anderson behind the baseline and effectively sealing his victory in the process.