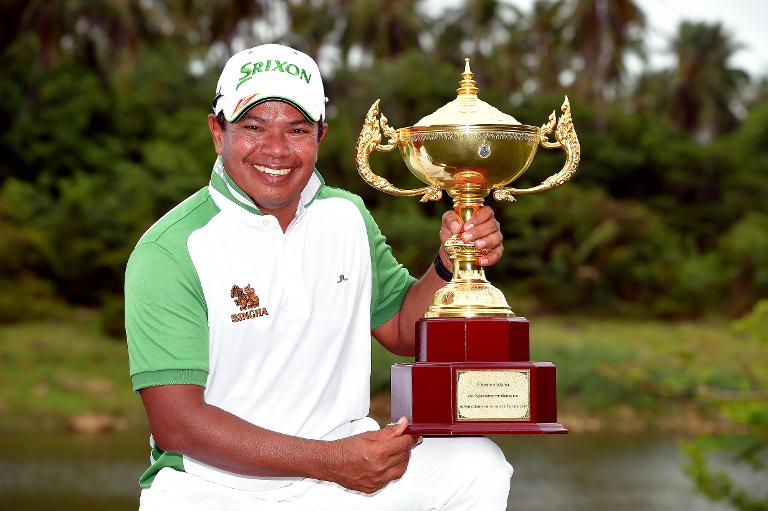 Thailand’s Prayad Marksaeng swept to victory on home soil at the Queen’s Cup in Koh Samui Sunday, shooting a six-under par 65 on a day that proved a nightmare for Japan’s Akinori Tani.

Prayad’s fortunes waxed and waned during round four of the $300,000 Asian Tour title as he made up for three bogeys with nine impressive birdies, comfortably taking the top spot with a final score of 270.

“To be able to win at 49 years old is just incredible for me. I am very proud of myself,” the Thai veteran, who takes home a $54,000 cheque, said according to a statement released by the organisers.

Fellow Thai Thanyakon Khrongpha matched Prayad’s 65 to jump up the leaderboard to second on 272, closely followed by compatriot Jazz Janewattananond and Bangladesh’s Siddikur Rahman who ended four strokes off the lead in joint third.

“I am disappointed, to be honest,” said 24-year-old Thanyakon, who has yet to notch up a tour victory.

“I had come close to winning a couple of times last year and I have been wanting to win on the Asian Tour for so long.”

Japan’s Tani had begun the day a comfortable three shots ahead of the pack but he repeatedly floundered at the Santiburi Samui Country Club under hot and humid skies.

By hole 14 he had racked up half a course of bogeys. He ended the day on a way over-par 75 and an ignominious joint sixth of 277.

Only a day earlier he had stormed round the same course with a seven-under-par 64, the best score of the tournament.