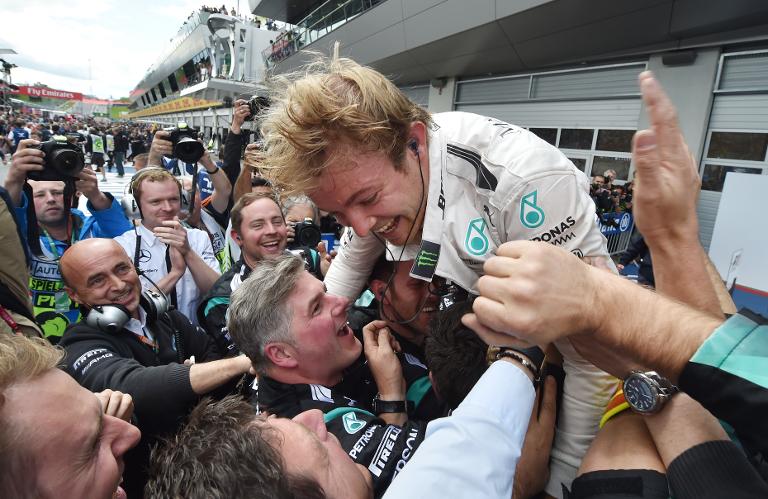 Nico Rosberg believes he has overcome his 2014 shortcomings after reeling off three wins in four races to close within 10 points of Mercedes team-mate Lewis Hamilton in the Formula One title race.

After winning Sundayâ€™s Austrian Grand Prix, the German said he felt happy with the way in which he managed the race and found the speed to hold off the series leader and defending world champion.

“I had a good start and then good pace in the race,” said Rosberg.

â€œThat is what I’m most happy about. I think I have found what I needed last year in terms of the races and that’s what is really working out for me this year.”

Rosberg won the race thanks to three main factors — his start, his race pace management and a five seconds penalty for Hamilton that gave him a psychological cushion.

Hamilton started from the 45th pole of his career, but was beaten off the line and into the first corner.

For Rosberg, the greatest satisfaction came from holding his lead and winning against the two-time champion.

“It has been a great day for me and it worked out well,” he said.

“I worked very closely on the clutch setting with my engineer, for the start, and that was just perfect and then I defended in the next two or three corners.

“After that I was very happy with my race pace. When I heard about Lewisâ€™s five seconds penalty I knew that helped. It made it a bit easier for me. I knew I had it in the bag with those five seconds.”

Last year, Rosberg took 11 pole positions to Hamiltonâ€™s seven, but did not translate that into a championship win because Hamilton won five times to his five victories.

This season, Hamilton won three of the opening four races, but Rosberg has now responded with three out of the last four to cut the Britonâ€™s advantage to 10 points — 169 to 159.

“I only had a slight worry towards the end of the race,” he said.

“It was just vibrations picking up on the right front. I was telling them (the team) to keep an eye on it, but it was fine in the end. It just came from tyre wear.”

Hamilton was disappointed, but gracious in defeat.

He contested the time penalty for crossing a pit lane exit line and also questioned a technical issue about the start.

“I don’t think I went over anything, to be honest,” said Hamilton. “And I think I had a problem with the revs. I took my foot off the gas and the throttle was still on.

“It was not the best way to start the race, but it is something we will work on to improve on my side of the garage.”

After eight of this year’s 19 races, Rosberg is only six points worse off than he was at the same stage in 2014.