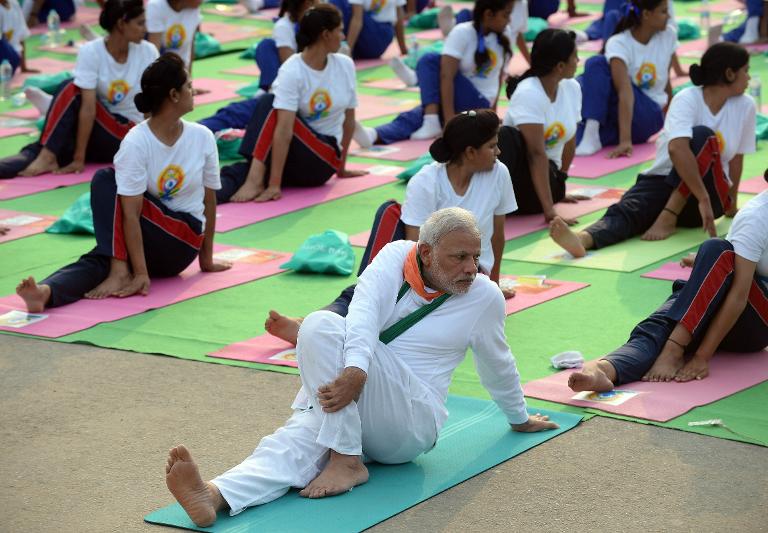 Prime Minister Narendra Modi on Sunday hailed the first International Yoga Day as heralding a “new era of peace”, moments before he surprised thousands in New Delhi by taking to a mat himself to celebrate the ancient Indian practice.

Yoga-loving Modi led more than 35,000 people, including bureaucrats, students and soldiers, performing poses such as the half camel and cobra in a 35-minute mass outdoor yoga session beginning at 7:00 am (0130 GMT) on a New Delhi boulevard.

The event set two new Guinness Book of World Records — one for the largest yoga class at a single venue with 35,985 participants and another for the most number of nationalities to attend with people from 84 countries, a government statement said late Sunday.

The previous record was set in 2005 when 29,973 students in the central Indian city of Gwalior gathered for a yoga class.

“Yoga is more than only physical fitness. We are not only celebrating a day but we are training the human mind to begin a new era of peace,” Modi told the crowd at Rajpath avenue.

He thanked the United Nations and the 177 co-sponsoring countries for adopting his idea for a world Yoga Day.

“This is a programme for human welfare, a tension-free world and a programme to spread the message of love, peace and goodwill,” said the premier, wearing a crisp white outfit with a national tricolour scarf.

Modi then surprised the crowds by leaving the stage, removing his glasses, and securing a spot at the front of the massive session to mirror the stretches, breathing, and meditative moves beamed on giant screens along the historic avenue.

He took a brief break in the middle of the session to walk around and inspect students doing yoga around him before rejoining the routine of 15 different poses, including the crocodile and “wind-releasing” posture.

The prime minister, who credits yoga for his ability to work long hours on little sleep, had been scheduled only to make a speech at Rajpath, where colourful mats were lined across the stretch that connects the presidential palace with the iconic India Gate monument.

Aerial images taken near dawn showed Rajpath, or King’s Avenue, as a sea of white with scores of people, clad in new Yoga Day T-shirts, bending and stretching in sync with English and Hindi instructions to a background score of Indian classical music being played over loudspeakers.

Central Delhi was sealed off and carpeted, with dozens of metal detectors and multiple checkpoints erected for the big day that saw other VIPs including Delhi Chief Minister Arvind Kejriwal participate.

People in 650 districts joined in, with pictures pouring in on Twitter from across the country.

Some showed soldiers performing various yoga poses — or asanas — against a backdrop of soaring snow mountains at Siachen glacier, the world’s highest battleground, in disputed Indian Kashmir while others showed residents stretching it out in local parks.

India was joined by yoga enthusiasts in 192 other countries, including in Britain, where mats were rolled out along the banks of the River Thames.

In his maiden address to the United Nations General Assembly, Modi proposed to dedicate a day devoted to the ancient Indian discipline, prompting the UN to proclaim June 21 as the International Day of Yoga.

Indian scholars believe yoga dates back 5,000 years, based on archaeological evidence of poses found inscribed on stones and references to Yogic teachings in the ancient Hindu scriptures of the Vedas.

And Modi, a vegetarian who practises the art daily, has made Yoga Day a key initiative of his Hindu nationalist government since he took office 13 months ago.

He wants to reclaim yoga as an historical part of Indian culture which has been lost to the West, where it has become a multi-billion-dollar industry.

Since storming to power, the Hindu nationalist premier has set up a ministry dedicated to promoting yoga and other traditional Indian treatments, and also started free yoga classes for his government’s three million bureaucrats and their families.

But the government’s push for “yoga for harmony and peace” met with criticism in the run-up to Sunday, with some religious minorities accusing Modi of pushing a pro-Hindu agenda in officially secular India.

Foreign Minister Sushma Swaraj has repeatedly emphasised that the craft has no link to any religion, describing it as “the science of integrating body, mind and soul”.

“At a time when ethnic conflicts and extremist violence are threatening to destabilise societies, yoga can serve as the perfect antidote to… move us on the path of harmony and peace,” Swaraj said at the UN’s Yoga Day launch in New York, where scores struck a pose in Times Square.