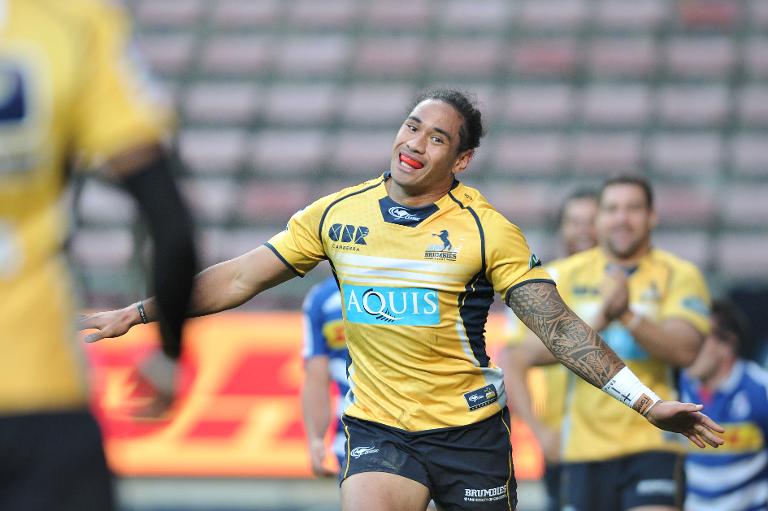 New Zealand-born rugby league convert Tomane wreaked havoc in the opening half of the play-off at Newlands stadium, scoring three tries within 25 minutes of the kick-off.

Prop Scott Sio barged over for a fourth try for the Australian outfit and the visitors led 24-6 at half-time.

The South Africans fared better early in the second half and twice got within eight points, but never looked like snatching victory.

No. 8 Ita Vaea and full-back Jesse Mogg also crossed the try-line for the Brumbies and fly-half Christian Lealiifano kicked three conversions and a penalty.

Mogg scored when his side were two men short after winger Henry Speight was red-carded for a dangerous tackle and flanker Scott Fardy yellow-carded for a professional foul.

And the Brumbies won the only tight-head of the scrum battle when packing down a man short in the closing stages.

Stormers fared poorly at the line-outs, failing to secure possession from seven of their throws.

The hosts also came off second best at the breakdowns with several Brumbies’ tries stemming from turn-over ball.

Brumbies are away to league winners Wellington Hurricanes next Saturday in one of two Australia-versus-New Zealand semi-finals.

The home side suffered a major pre-match blow when veteran flanker Schalk Burger was ruled out by a groin injury.

“I had a lot of fun out there and you live to play in these sort of games,” said man-of-the-match Tomane.

Brumbies hooker and skipper Stephen Moore added: “This was a special win and I am so proud of our performance. We played really well.”

“We struggled at the breakdowns and could not build phases. The late withdrawal of Schalk (Burger) did not help.”

A grubber kick by scrum-half Nic White set up Tomane for his first try on three minutes and hard-running forwards featured prominently in the build-up to his second.

His third was the easiest as he darted down the left wing with the Stormers defence asleep.

Raw power earned Sio his try and Lealiifano slotted two first-half conversions while all the Stormers could muster was two Catrakilis penalties.

Lealiifano and Catrakilis exchanged penalties and the Brumbies were 27-19 ahead midway through the second half.

Vaea used his strength to dot down and Lealiifano converted to effectively end the match as a contest.

The late try in the corner by Mogg was particularly satisfying given the Australians’ numerical disadvantage.