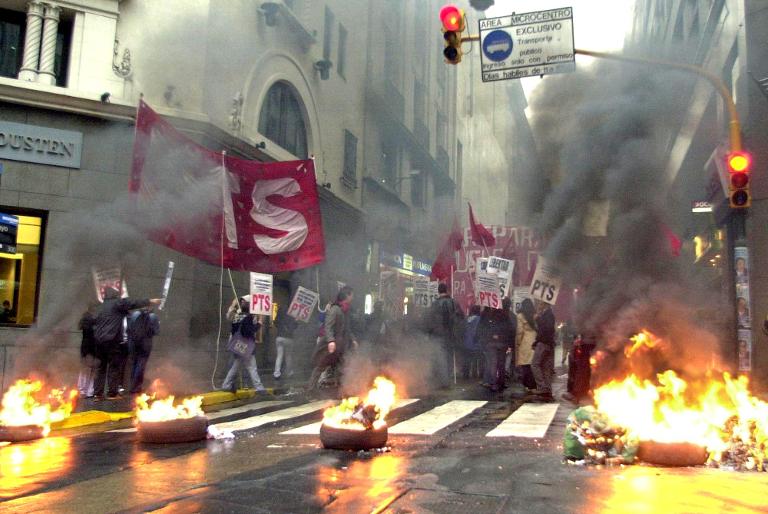 With Greece in danger of tumbling into the economic abyss it faces the haunting memory of Argentina in 2001, when the South American country defaulted on nearly $100 billion and was plunged into a crisis it is still battling back from.

Like Greece, Argentina had been living beyond its means for years, dating back at least to the country’s 1976 to 1983 dictatorship, when the junta jacked up military spending.

The debt continued to spiral in the 1990s as Argentina borrowed to fund a novel inflation-fighting program in which the government pegged the value of the peso to the dollar, holding $1 in reserve for every peso in circulation.

The so-called “convertibility” plan successfully reined in the hyperinflation that had dogged Argentina for 40 years.

But it left the country’s books badly overstretched by 1999, when the shockwaves of the world financial crisis plunged Argentina into recession.

To respond to the demands of the International Monetary Fund, the Argentine government enacted austerity measures and tax hikes.

But that provoked a series of general strikes.

As warnings of an imminent crisis spiralled, Argentines withdrew $22 billion from their banks in less than three months.

In December 2001, in a bid to stop the run on banks, economy minister Domingo Cavallo, architect of the convertibility plan, ordered nearly $70 billion in bank deposits frozen.

That sparked riots and a government crackdown that left 33 people dead.

Looters trashed supermarkets and tens of thousands of Argentines vented their wrath by banging pots and pans in the street — the so-called “cacerolazo” protests.

On December 19, 2001, President Fernando de la Rua decreed a state of siege. A day later, as thousands of angry protesters massed outside the presidential palace, he resigned and left aboard a helicopter.

But the crisis soon turned the presidency into a revolving door, churning through five politicians in just two weeks.

By the time the carnage ended, the economy had shrunk by one-fifth, inflation had soared and the peso had been devalued by 70 percent.

The Argentine economy returned painfully to growth at the end of 2002, but the hangover lasted far longer.

Argentina reached deals with most of its creditors in 2005 and 2010 to restructure its debt, convincing investors to take losses of up to 70 percent on the face value of their bonds.

But two American hedge funds that had bought up defaulted Argentine debt for pennies on the dollar, billionaire speculator Paul Singer’s NML Capital and Aurelius Capital Management, sued Argentina in the US courts for full payment and won.

Griesa later extended his ruling to other holdout creditors, putting Argentina on the hook for a total of $7 billion.

Greece will at least be spared that part of Argentina’s travails. The Argentine experience led to the addition of majority clauses to debt contracts, so that investors must accept restructuring deals if they are approved by more than 50 percent of creditors.

Since 2001, Argentina has issued no bonds on the international debt market.

“We’ll make do with the means we’ve got,” said economist Aldo Ferrer of the so-called “Plan Phoenix,” the program to get the Argentine economy to rise from the ashes.

In some ways, it has done just that.

A major agricultural exporter, Argentina got a boost from the commodities boom of the 2000s.

The crisis was followed by a decade of eight-percent average annual growth — though high inflation, a weak peso and economic uncertainty still linger.

Except for its small neighbor Uruguay, which has strong trade ties with Argentina, the fallout of Argentina’s crisis was relatively limited.

“A Greek default would have more painful consequences and a definite impact on the eurozone,” he said.

“These traumatic exits are never good.”