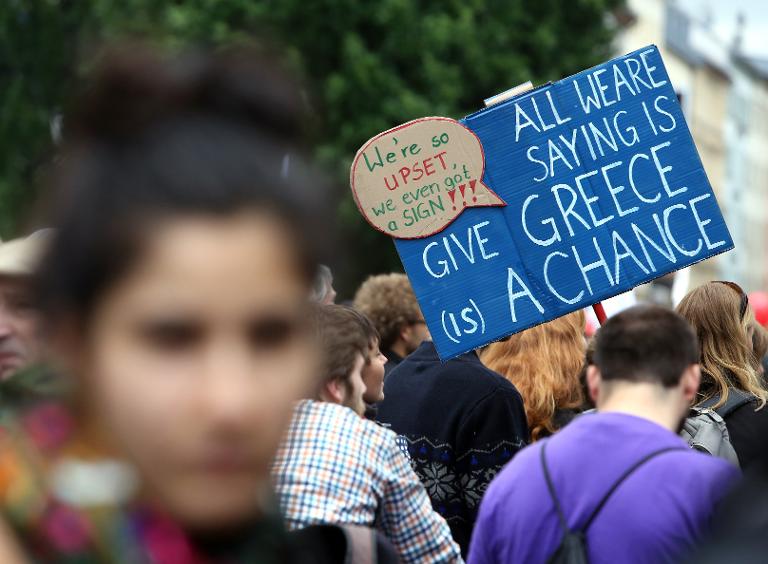 Greece on Saturday said it would present new proposals to its EU-IMF creditors to reach a debt deal as the country’s outspoken finance minister called on German Chancellor Angela Merkel to make a “clear decision” at an upcoming emergency summit.

The pressure has mounted on Greece ahead of an emergency summit of the leaders of the 19 countries in the euro area on Monday in Brussels.

But the country’s finance chief Yanis Varoufakis, whose flamboyant style has irked many of his European counterparts, turned the tables by putting the onus on the leader of paymaster Germany to make a deal.

Merkel can “enter into an honourable agreement with a government, which has rejected the ‘rescue package’ and is seeking a negotiated solution, or follow the calls from (those in) her government who want her to throw overboard the only Greek government which has been faithful to its principles and which is able to take the Greek people on the road to reform,” said Varoufakis in an article to appear in the German press on Sunday.

German public opinion has soured on Greece after five months of contentious negotiations, with a recent poll showing 51 percent now believes Athens should leave the eurozone.

But the leftist Greek government insists it will present compromises that should bring Athens and its creditors — European Commission, International Monetary Fund and European Central Bank — closer to agreement on freeing up 7.2 billion euros ($8.1 billion) in blocked bailout funds Greece desperately needs to meet looming debt payments to the IMF and ECB.

“We are going to present measures that bridge the gap,” Flambouraris was quoted as saying by Greek media, while also predicting Greece’s creditors won’t be satisfied with the gestures.

“You’ll see they won’t accept loosening budget (restrictions), or our proposal on the debt,” he said of two main sticking points in the talks.

Given the continued deadlock and ticking clock towards potential default, Flambouraris said a phone exchange between Greek Prime Minister Alexis Tsipras and European Commission president Jean-Claude Juncker could take place over the weekend.

Amid growing global concern over a potential “Grexit”, US Treasury Secretary Jacob Lew also weighed in, urging all sides to show flexibility to resolve the impasse.

“It’s clear that within Greece the consequence of a failure here would mean a terrible, terrible decline in their economic performance,” he told CNN, while also warning of the wider repercussions of a Greek default.

“The reality is that there are impacts on markets. And I don’t think anyone should want to find out,” he said of the prospect of Greece leaving the eurozone.

If there’s no deal, Greece seems likely to default on an IMF debt payment of around 1.5 billion euros due on June 30, and with that risk a chaotic exit from the eurozone.

That prospect appeared to be fuelling the rising number of Greek savers withdrawing money from national banks. The rush of withdrawals forced the ECB on Friday to lift its emergency liquidity reserve available to Greek banks for the second time in a week.

Tsipras — who has never hidden his desire that an eventual accord be hashed out between political leaders rather than by negotiating teams of technical advisers — will find his European peers waiting expectantly for breakthrough proposals at Monday’s emergency summit.

“The German chancellor has a clear decision to make on Monday,” he wrote in an op-ed to be published Sunday in Frankfurter Allgemeine Zeitung.

“On our side, we will come with determination to Brussels to agree to further compromises as long as we are not asked to do what the previous (Greek) governments have done: accept new debt under conditions that offer little hope for Greece to repay its debts,” he wrote, without specifying the compromises.

That sentiment resonated with demonstrators around Europe on Saturday who took to the streets to protest against spending cuts and austerity measures taken by their governments, and expressing solidarity with Greece.

Tens of thousands marched in London in the first public protest since the re-election of Conservative Prime Minister David Cameron, while thousands in Berlin joined a rally organised by leftist organisations and opposition Greens party.

On Sunday French President Francois Hollande will travel to Milan to open an exhibit there and hold talks with Italian Prime Minister Matteo Renzi, with the Greek crisis expected to be a focus of discussions.