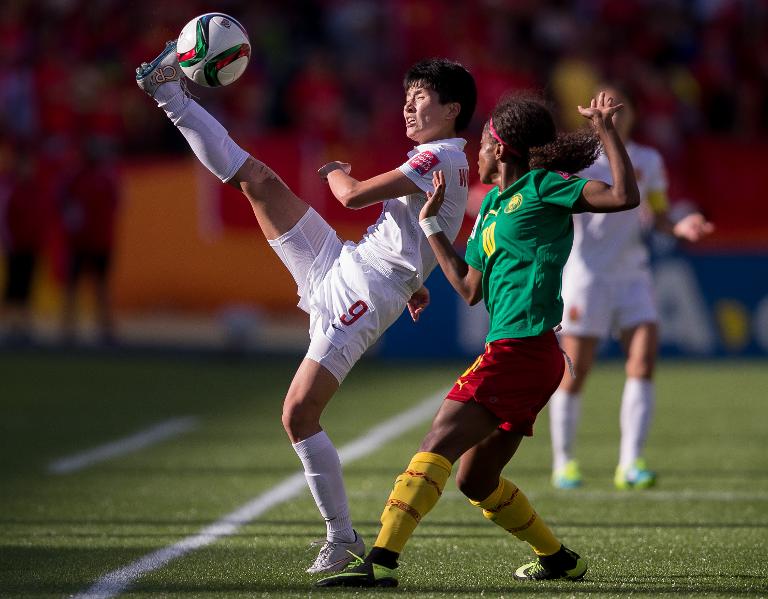 Germany and China booked the first two spots in the quarter-finals of the Women’s World Cup as they brushed aside rivals Sweden and Cameroon.

Germany, champions in 2003 and 2007, demolished Sweden 4-1 in Ottawa on Saturday, while China won 1-0 in Edmonton to send the last African challenger Cameroon home.

Forwards Celia Sasic and Anja Mittag both scored their fifth goals of the tournament, with Sasic netting a double, as the top-ranked Germans closed down their fifth-ranked European rivals in scorching conditions at Lansdowne Stadium.

Germany coach Silvia Neid described the victory as “a very important game, maybe a key match” in the tournament.

“We haven’t had games of this quality in the World Cup apart from Norway,” said Neid, whose group had included minnows Ivory Coast and Thailand.

Germany, who were shocked in the quarter-finals of the 2011 World Cup at home, next play either France or South Korea for a place in the semi-finals.

While Germany and Sweden battled in temperatures reaching 38 degrees Celsius (100 Farenheit), it was raining in Edmonton, where Wang Shanshan’s first half goal was enough for China to set up a meeting with either the United States or Colombia.

China coach Hao Wei had a touchline ban and was forced to watch the game from the stands in Edmonton’s Commonwealth Stadium.

But his side closed down the game early when Wang Shanshan got the opener after 12 minutes when she picked up pass from Li Dongna who did well to control a Wang Lisi corner.

“Today all the players were wonderful, they put on a spectacular performance, demonstrating amazing resilience and bravery,” said assistant coach Chang Wei-Wei.

“They fought like warriors for over 90 minutes. I want to thank them for their hard work.”

Once 25-year-old Wang scored her second goal of the tournament it was impossible for Cameroon to get through.

“The Chinese deserved their victory we can just say bravo. Their team is very complete,” said Cameroon coach Enow Ngachu, whose side were just the second from Africa to reach the knockout rounds after Nigeria in 1999.

“They don’t score many goals but they defend very well. We knew that if we conceded a goal it would be very difficult for us.”

China failed to qualify for the 2011 tournament and the Olympic Games the following year, and midfielder Ren Guixin, named player of the match, said there was more to come.

“We are in the top eight now and a huge burden has been lifted off our shoulders, we will become even more aggressive in our next match,” warned Ren.

“The biggest weapon of the Chinese team is based on strong defence to create more scoring opportunities.”

Despite a spirited challenge by the 53rd-ranked African side, the 16th-ranked Chinese held on to make it through to the last eight for the sixth time.

In Ottawa, Mittag, 30, set Germany on their way in the 24th minute with a solo run following a poor pass in the Swedish defence for her fifth goal in four matches.

And 12 minutes later Sasic got her first when she slotted in a contentious penalty awarded for a foul on Mittag inside the box by her former FC Rosengard teammate Amanda Ilestedt.

Sofia Jakobsson nearly pulled one back for the Swedes seconds before half-time but could not manage to keep her header down.

Sasic grabbed her second on 78 minutes when her diving header gave her a fifth goal of the tournament after Simone Laudehr’s initial effort had come back off the post.

Defender Linda Sembrant got one back for the Swedes with eight minutes to go, but Dzsenifer Marozsan added another for the Germans two minutes from time.

“If you want to win that kind of game when Germany are playing that well you need everything going your way and it did not,” said Sweden coach Pia Sundhage.

In Sunday’s action, star forward Marta returns as Brazil take on Australia in Moncton; France will be up against South Korea in Montreal and hosts Canada play Switzerland in Vancouver.