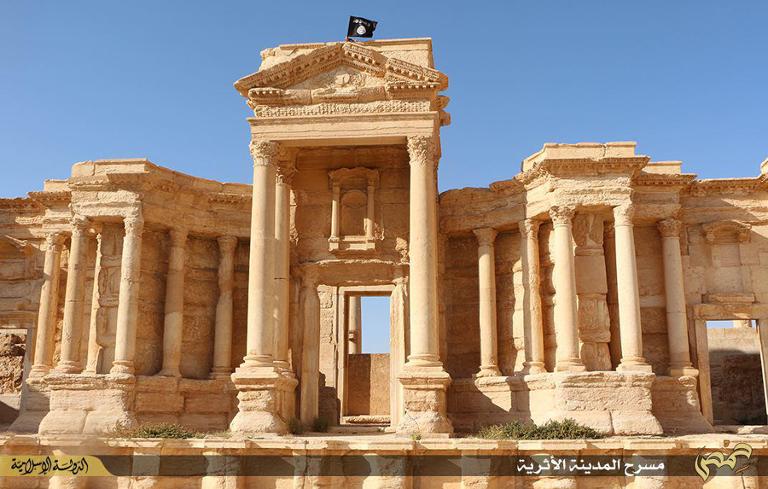 The reports came one month after the extremist group overran the central Syrian city.

Syria’s antiquities chief Maamoun Abdulkarim and the Syrian Observatory for Human Rights monitor said that the group had laid mines and explosives in Palmyraâ€™s Greco-Roman ruins.

The Observatory, which relies on a network of sources on the ground, said the explosives were laid on Saturday.

“But it is not known if the purpose is to blow up the ruins or to prevent regime forces from advancing into the town,” said Observatory director Rami Abdel Rahman.

He said regime forces had launched heavy air strikes against the residential part of Palmyra in the past three days, killing at least 11 people.

“The regime forces are to the west outside the city, and in recent days they have brought in reinforcements suggesting they may be planning an operation to retake Palmyra,” he added.

A political source told AFP that a leading commander had been dispatched to the region to organise an offensive to recapture and secure Palmyra and several key gas fields nearby.

Abdulkarim also said Sunday he had received reports from Palmyra residents that the ruins had been mined.

“We have preliminary information from residents saying that this is correct, they have laid mines at the temple site,” he told AFP.

“I hope that these reports are not correct, but we are worried.”

He urged “Palmyra’s residents, tribal chiefs and religious and cultural figures to intervene to prevent this… and prevent what happened in northern Iraq”, referring to IS’s destruction of heritage sites there.

“I am very pessimistic and feel sadness,” he added.

IS captured Palmyra, which is famed for its extensive and well-preserved ruins, on May 21.

The group has regularly heavily mined its territory to make it more difficult to recapture.

The city’s fall prompted international concern about the fate of the heritage site described by UNESCO as of “outstanding universal value”.

Before it was overrun, the head of the UN cultural body urged that the ruins be spared, saying they were “an irreplaceable treasure for the Syrian people, and the world”.

IS has released several videos documenting its destruction of heritage sites in Iraq and Syria.

In its extreme interpretation of Islam, statues, idols and shrines amount to recognising objects of worship other than God and must be destroyed.

There have been no reports of damage to sites in Palmyra since IS seized it, though the group’s fighters reportedly entered the city’s museum, which had largely been emptied of its collection before the jihadists arrived.

The group executed more than 200 people in and around Palmyra in the days after capturing the city, including 20 who were shot dead in the ancient ruins, according to the Observatory.

Before Syria’s war began, more than 150,000 tourists visited Palmyra each year, admiring its beautiful statues, more than 1,000 columns and formidable necropolis of over 500 tombs.

It had already suffered before IS’s arrival, with clashes between rebels and government forces in 2013 leaving collapsed columns and statues in their wake.

The site is also believed to have been looted during the chaos of the war that began in March 2011 with anti-government protests.

In December, the UN said nearly 300 cultural heritage sites in Syria, including Palmyra, had been destroyed, damaged and looted.

More than 230,000 people have been killed in Syria since the conflict started.