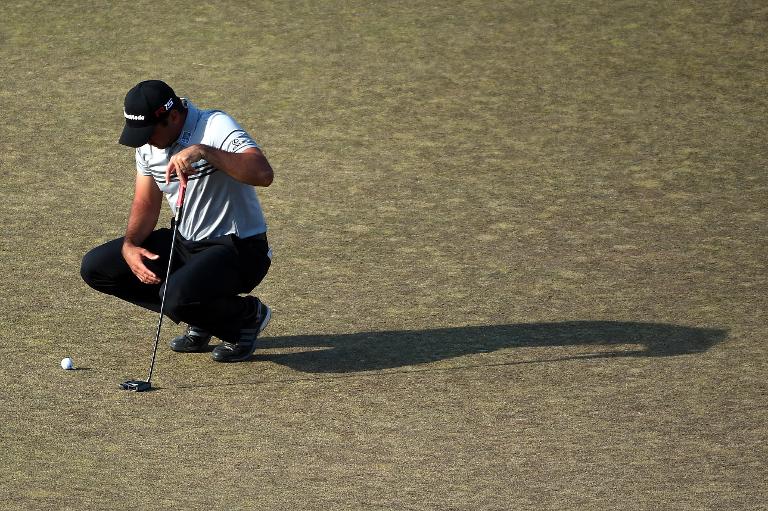 Americans Dustin Johnson and Jordan Spieth, Australian Jason Day and Branden Grace of South Africa will share the lead going into Sunday’s final round of the US Open.

It will be just the second time in the history of the US Open that four players have been tied at the top with one round to go after Oakmont in 1973.

The international quartet emerged ahead from a day of all-out attrition on the unforgiving links of Chambers Bay golf course that saw just eight players still under par by the time the dust had settled.

The round of the day though came from Day, who came close several times to abandoning due to vertigo sickness, only to battle back against the odds with four birdies down the back nine.

They were three shots clear of the field with four players tied on one under – Louis Oosthuizen of South Africa, who had the round of the day with a 66, Cameron Smith of Australia (69), Shane Lowry of Ireland (70) and JB Holmes of the United States (71).

In a day of dramas, Day’s heroic effort was the most dramatic of all.

He collapsed playing the final hole of his second round on Friday, struck down by another attack of the vertigo which he has been suffering from for the last year.

He had to be helped onto the green to finish his round and then needed extensive medical treatment before waking up on Saturday and deciding to step onto the tee in the early afternoon despite still feeling unwell.

At times he struggled to stay on his feet, looked distressed throughout, and even had difficulty glancing up to follow his ball flight.

But somehow he kept his game together as others around him came to grief on a golf course that takes no prisoners. Day on the contrary picked up shots.

“I didn’t feel that great coming out early, and then I felt pretty groggy on the front nine just from the drugs that I had in my system, then kind of flushed that out on the back nine,” the 27-year-old Queenslander said.

Johnson, who has come close in the past in all four of the majors but has yet to win one, stained his round with three bogeys and a double.

But his length was always going to be a godsend on this monster course as he also rattled in five birdies to keep himself on par for the day.

“I’ve been in the situation a few times so I know how to handle myself,” he said.

“I know what it takes to get it done. And tomorrow just need to go out there and focus on one shot at a time. And we’ll see what happens.

But he finished strongly to climb into the four-way tie boosting his hopes of becoming the first players since Tiger Woods in 2002 to win the Masters and the US Open in the same year.

“Four three-putts today, two of them I could not do much about them. The other two were unforced. All in all it was just a little bit off. But plenty of birdies. Just need to limit the mistakes tomorrow,” the 21-year-old Texan said.

Grace, at 27 the latest ace to emerge from the golfing academies of South Africa, grappled with the lead all day before bogeys at 12 and 13 pegged him back.

But he rallied again with a birdie at 15 to join the leaders and keep alive his hopes of winning a first major title.

“I’m stoked. I can’t wait. Tomorrow is going to be a good one. Like I said, this is what we play golf for. So it’s my dream to lead a tournament or tying the lead,” he said of the challenge ahead of him on Sunday.

World number one Rory McIlroy hit an array of superb shots, but at the end of the day his 70 meant he was still four over for the tournament and needing a minor miracle on Sunday to win a fifth major title from eight strokes back.

Phil Mickelson’s chances of finally winning a US Open, after a record six runner-up finishes, were wrecked when a 77 left him a distant 10 over.