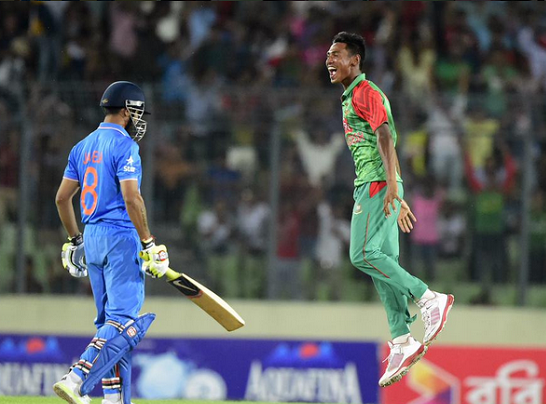 Mirpur: IndiaÂ on Sunday slumped to a new low as they suffered their first ever ODI series defeat againstÂ BangladeshÂ following an embarrassing six-wicket defeat in the second cricket One-dayer that gave the hosts an unassailable 2-0 lead in the three-match series, in Mirpur.Â

Young Bangladeshi paceman Mustafizur Rehman (6/43) yet again tormented the Indian batsmen with his second successive six-wicket haul as the visitors folded for 200 in 45 overs.Â

The 19-year-old young left-arm pacer from remote Satkhira village became only the second bowler in ODI history to record two five-wicket hauls in his first two matches. Zimbabwe pacer Brian Vitori is the only other bowler to get two fifers in as many ODIs first up.Â

Indian openerÂ Shikhar DhawanÂ made a useful contribution of 53 runs while skipperÂ MahendraÂ SinghÂ DhoniÂ (47) looked horribly out of touch in his innings. The only significant stand of the Indian innings was between Dhawan and Virat Kohli (23) as they added 74 for the second wicket.Â

Due to rain interruption late in the Indian innings, the hosts were set a target of 200 in 47 overs and the Bangladeshi went about their job fearlessly, overhauling the total withÂ nine overs to spare.Â

It was highly disappointing show by the star-studded Indians, who were outclassed in all departments of the game by the spirited Bangladeshis who are now on a roll with a string of good performances.Â

Bangladesh have been doing well of late in world cricket from reaching the quarterfinals of the World Cup to blanking Pakistan 3-0 in a recent ODI series. This series-win has certainly enhanced their reputation and they can not be considered Asian minnows anymore.Â

Bangladesh have also qualified for the 2017 ICC Champions Trophy, to be held in England, following this series win.Â

The home batsmen went about their business without any fuss as openers Tamim Iqbal (13) and Soumya Sarkar (34) stroked confidently from the word go.Â

The openers did not put up a great stand but all the following batsmen contributed and made it an easy chase, much to the delight of the home fans.Â

Tamim was lucky to survive early when he had not even opened his account as the catch taken by Virat Kohli off Dhawal Kulkarni was not found clean by the umpires.Â

However, Kulkarni had Tamim (13) caught in the slip region in the seventh over when the left-hander edged an away going ball and Shikhar Dhawan took a simple catch.Â

Litton Das (36), Mushfiqur Rahim (31) and experienced Shakib Al Hasan (51 not out) batted with a lot of determination, foiling all attempts of the Indians of making a comeback.Â

The Indian pacers and spinners posed no threat except for a few balls when the ball either turned sharply or bounced high. However the Indian bowlers lacked consistency and more than that the home batsmen played with a lot of purpose.