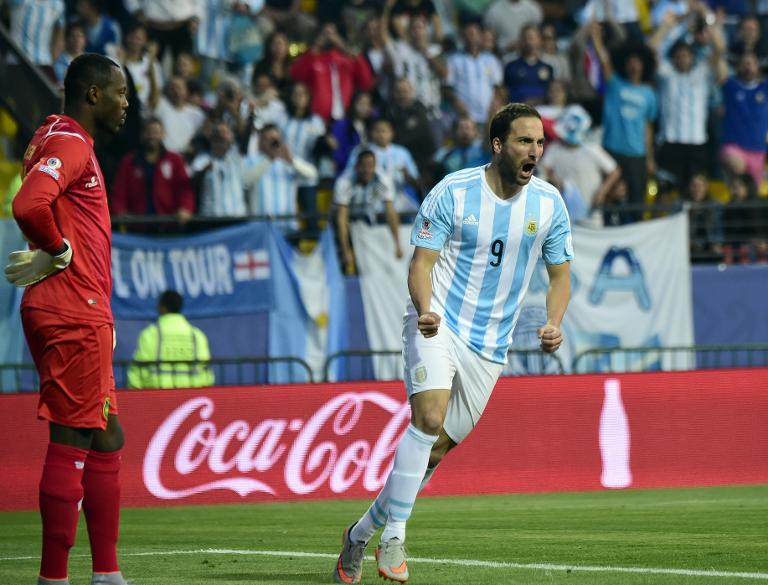 Argentina marked Lionel Messi’s 100th cap with an unconvincing 1-0 win over Jamaica to reach the Copa America quarter-finals as group winners as holders Uruguay advanced to the last eight.

Napoli striker Gonzalo Higuain rifled home the only goal for Argentina as the tournament favorites downed the Reggae Boyz in Vina del Mar to clinch top spot in Group B ahead of Paraguay and Uruguay.

But it was another patchy performance from the 2014 World Cup quarter-finalists, who struggled to break down a team ranked 62 places below them in the latest FIFA standings.

Argentina coach Gerardo Martino blamed weariness for his side’s disjointed performance, and said his side were looking forward to some rest in the six-day break before next Friday’s quarter-final.

“The first half was okay. We played fine and we scored quickly and created five or six chances to score,” Martino said.

“At the end though it was a bit tedious but we did what was necessary. Physically we struggled a bit in the second half.”

Argentina will play either Ecuador or the third placed team from Group C in the last eight.

“There are things to fix,” Martino said. “We’ve got six days’ rest now before the quarter-finals and I think we need them.

“We’ve had three matches in a week so it’s been a tough schedule.”

Jamaica’s players meanwhile celebrated a brave performance against one of the powerhouses of international football.

At the final whistle, striker Deshorn Brown posed for a selfie with Argentina skipper Messi, who was unable to mark his century of caps with a goal.

The Barcelona superstar meanwhile was happy to swap the jersey from his 100th international appearance with Jamaican midfielder Jobi McAnuff, who plays in the fourth tier of the English football league system.

Jamaica captain Rodolph Austin said he was proud of his team’s performances in Chile, as they headed home from the tournament after three consecutive 1-0 defeats in the first round.

Restricting Argentina to only Higuain’s 11th-minute strike was a particular source of satisfaction for Jamaica, one of two teams invited to take part in the South American football showpiece from North America, Central America and Caribbean region (CONCACAF).

“I’m proud of the team. We maybe showed them a little bit too much respect in the first half and we didn’t come at them and press them enough,” the midfielder said.

“But to come here and lose by only one goal against a side like Argentina is a good for us.”

Earlier Saturday, Uruguay made sure of their place in the last eight from Group B after battling to a 1-1 draw with Paraguay in a rematch of the 2011 final.

Uruguay secured the point they needed to advance after taking the lead through Jose Maria Gimenez before Paraguay equalised on the stroke of half-time with a goal from Lucas Barrios.

Paraguay were already guaranteed a place in the knockout rounds after results elsewhere on Friday, when Ecuador’s win over Mexico in Group A ensured they would qualify.

Uruguay took the lead after 29 minutes through Gimenez, who rose high to meet a corner from Carlos Sanchez with a powerful downward header.

But Paraguay hit back shortly before half-time with a set-piece goal of their own, Barrios heading home Edgar Benitez’s corner.

– Brazil aim to bounce back –

Sunday sees the conclusion of the group stage with Brazil aiming to bounce back with victory over Venezuela in the wake of their stormy 1-0 defeat to Colombia.

The Brazilians will be without striker Neymar, sensationally axed from the remainder of the tournament on Friday after receiving a four-match ban for headbutting an opponent and verbally abusing the referee in the Colombia game.

“CBF legal experts will respond to all the action taken against Neymar,” Dunga told a press conference.