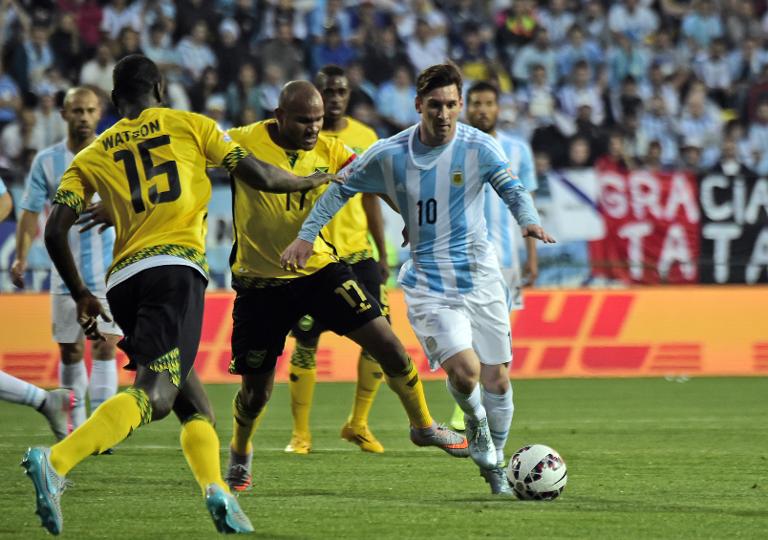 Gonzalo Higuain fired the only goal as Argentina marked Lionel Messi’s 100th appearance with an unconvincing 1-0 win over Jamaica to reach the Copa America quarter-finals as group winners.

Napoli striker Higuain, reportedly a transfer target for English giants Manchester United and Arsenal, struck in the 11th minute to ensure Argentina finished on top of Group B ahead of Paraguay and Uruguay.

But it was another patchy performance from the 2014 World Cup finalists, who made desperately hard work of breaking down a side ranked 65th in the world.

“The first half was okay. We played fine and we scored quickly and created five or six chances to score,” Martino said.

“At the end though it was a bit tedious but we did what was necessary. Physically we struggled a bit in the second half.”

Argentina will now have nearly a week’s rest before the quarter-final, which will be against either Ecuador or the third-placed team in Group C.

“There are things to fix,” he said. “We’ve got six days’ rest now before the quarter-finals and I think we need them.

“We’ve had three matches in a week so it’s been a tough schedule.”

The build-up to the match in Vina del Mar had been dominated by Messi, who took to the field wearing boots emblazoned with “100” as he brought up a century of caps.

After a one-sided opening spell it looked as if the South American giants were ready to lay on a goal feast to mark their captain’s milestone.

But Jamaica, whose players are drawn mostly from Major League Soccer and the lower leagues of English football, proved surprisingly resilient, with goalkeeper Dwayne Miller producing some fine saves.

Messi, Higuain and Manchester United star Angel Di Maria all started brightly, bristling with energy and intent as Jamaica struggled to get out of their own half in the opening minutes.

The early pressure paid off when Di Maria crossed low to Higuain, who took one touch before spinning smartly to shoot low past Miller for 1-0.

Higuain almost doubled his tally in the 22nd minute when he broke clear and lobbed Miller only to see his shot bounce off the crossbar.

Di Maria should have made it 2-0 on 39 minutes, bursting from deep inside his own half but electing to shoot when he could have squared to an unmarked Messi.

Jamaica keeper Miller was then pressed into action again, tipping over from Di Maria just before half-time.

Di Maria had Miller beaten early in the second half when he sent a rasping left foot shot crashing back off the woodwork as Jamaica survived again.

Messi was the next to be frustrated by Miller, lifting an exquisite chip over the Sweden-based stopper only to see the 27-year-old just manage to pluck the ball down with his fingertips.

As the game progressed, Argentina looked increasingly devoid of inspiration, and the match finished with Chilean fans giving roars of “Ole” whenever Jamaica put together sequences of passes.

The final moments saw Jamaica pressuring Argentina’s defence but unable to grab the equaliser which could have forced the drawing of lots with Paraguay to determine the winners of Group B.