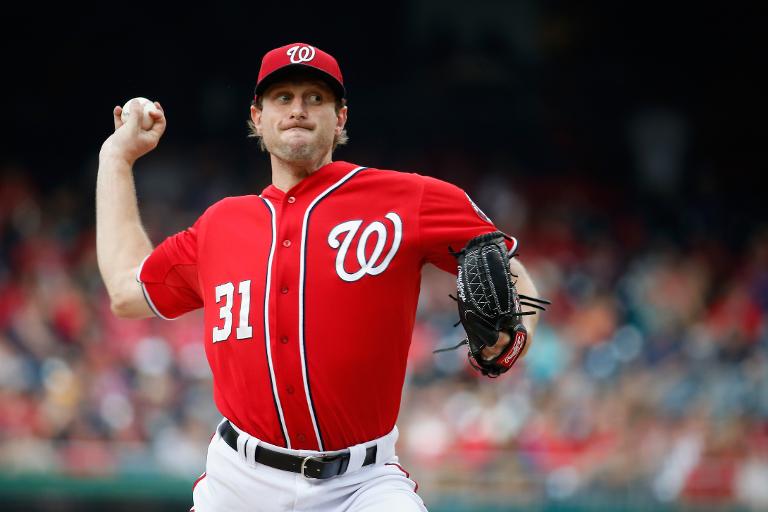 Washington Nationals pitcher Max Scherzer hurled a no-hitter, coming within one strike of a rare perfect game before plunking a Pittsburgh batter with a pitch.

Scherzer was in dominant form in the 6-0 win, retiring the first 26 batters he faced to stand one batter away from Major League Baseball’s 24th perfect game — a victory in which a pitcher allows no opposing player to reach base.

With two outs in the ninth Pirates pinch-hitter Jose Tabata came to the plate and fouled off three 2-2 pitches before a slider from Scherzer nicked the batter on the left elbow to send him to first base.

“I was so close with two strikes,” said Scherzer, who was doused with chocolate sauce by team-mates by way of celebration. “But I got a no-hitter in front of these fans. Nothing is better than that.”

It was the 13th time a perfect game was broken up with two out in the ninth.

“Just didn’t finish the pitch,” Scherzer said. “It backed up on me and clipped him.”

Tabata said the pitch hit him on his elbow protection pad, and he had no room for regret.

“He wanted to strike me out, but my job is to get on base any way I can,” Tabata said. “So when I saw the umpire make motion for me to go to first base, I’m, ‘Oh, wow.’ He got me, so he didn’t throw a perfect game.”

But Scherzer completed the no-hitter three pitches later, inducing a fly out to left field off the bat of Josh Harrison.

It was the sixth no-hitter in the history of the Nationals franchise, and the second since the team relocated to Washington from Montreal.

“It shows his mental fortitude,” Nationals manager Matt Williams said of his ace.

Scherzer pounded his right hand into his glove and triumphantly raised his arms up in the air once Michael Taylor caught the final out.

“It was a cloud-nine moment,” Scherzer said.

The performance was all the more impressive coming on the heels of the one-hit gem Scherzer pitched against the Milwaukee Brewers in his previous start.

Scherzer, who inked a seven-year, $210-million contract with the Nationals in January, struck out 10 and became the fifth pitcher to allow one hit or fewer in consecutive complete games.

He needed only 106 pitches to complete Saturday’s no-hitter.

“I’m just locked in,” Scherzer said. “I have a good game plan with the catchers, the offense is showing up. We are just playing good team baseball.”

Scherzer fired 82 of his pitches for strikes and was 22-of-28 in first-pitch strikes.

The closest the Pirates came to notching a hit was in the eighth inning, when a charging Nats second baseman Danny Espinosa threw out Pedro Alvarez by a step from the outfield.

The no-hitter was the second of the season. San Francisco Giants rookie Chris Heston no-hit the New York Mets on June 9.