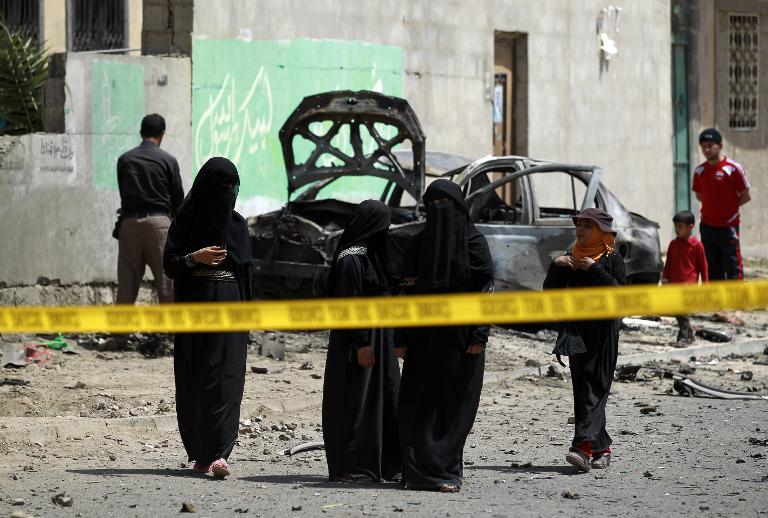 The explosion in Sanaa, controlled by Iran-backed Shiite Huthi rebels, went off outside the Kobbat al-Mehdi mosque as Shiite Muslims emerged from midday prayers, witnesses and security sources said.

As well as the two dead, another 16 people were wounded, medical officials said.

The blast, which comes as Muslims observe the fasting month of Ramadan, damaged the entrance of the mosque and shattered the windows of a nearby house, an AFP photographer reported.

The Islamic State group claimed responsibility for the attack, SITE Intelligence Group reported, the latest in a series that has targeted Sanaa, which the Huthi rebels seized in September.

Since then they have expanded their control to other parts of Sunni-majority Yemen, including Aden in the south, forcing President Abedrabbo Mansour Hadi and his government to flee to Saudi Arabia.

On Wednesday, at least 31 people were killed and dozens wounded in five simultaneous bombings, also claimed by the radical Sunni Muslim jihadist group at Shiite mosques and offices in Sanaa.

A pro-government military source said the dawn strikes pounded the northern, eastern and western approaches to Aden, to isolate the Huthis and support forces loyal to Hadi.

“The objective is to close the noose around the Huthi rebels in Aden and assist the Popular Resistance Committees,” said the source.

They have been locked in fierce fighting against the Huthis in Aden, which has been devastated by Saudi-led strikes launched in March in support of Hadi.

On Saturday the rebels shelled several neighbourhoods of Aden, killing four people and wounding several others, the military source said, a toll confirmed by hospital officials.

The violence came after UN’s special envoy for Yemen Ismail Ould Cheikh Ahmed announced Friday in Geneva that talks between the warring sides ended without agreement.

“I won’t beat around the bush. There was no kind of agreement reached,” the Mauritanian diplomat told reporters.

Yemen’s rivals blamed each other for the deadlock.

“I am disappointed. We did everything to make the talks a success but there were too many obstacles, especially the demand for a withdrawal,” rebel delegation head Hamza al-Huthi told AFP.

Yemen’s exiled foreign minister blamed the lack of progress on the rebel delegation.

“We really came here with a big hope… but unfortunately the Huthi delegation did not allow us really to reach real progress as we expected,” said Riad Yassin.

The government is demanding in line with a UN Security Council resolution that the rebels withdraw from the territory they control, but the Huthis have called for an unconditional halt to the air strikes before they consider a pause in fighting.

The rebels are backed by fighters loyal to former president Ali Abdullah Saleh, who was forced to step down after a year of bloody protests calling for an end to his three decades of iron-fisted rule.

More than 2,600 have been killed in the fighting which has also left 80 percent of the population — 20 million people — in need of urgent humanitarian aid, according to UN estimates.

The situation is particularly grave in Aden, where residents have complained of food and water shortages, while medics speak of a rapidly deteriorating health situation and the spread of disease.

A boat laden with supplies, including flour, that was due to dock in Aden this week had to divert course to Hodeida in western Yemen due to the fighting, said Aden Deputy Governor Nayef al-Bakri.

He accused the Huthis of deliberately forcing the vessel, chartered by the UN’s World Food Programme, to change course because they control the port in Hodeida.