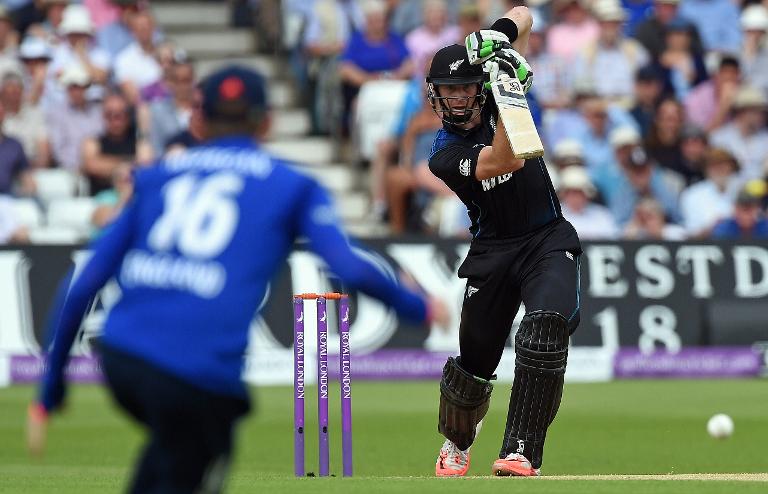 Ben Wheeler’s quickfire 39 not out took New Zealand to 283 for nine against England in the fifth and deciding one-day international at the Riverside on Saturday.

Wheeler, who only faced 28 balls in total, ended the innings by striking Finn for a four and two sixes off successive deliveries.

But with rain falling during the innings break, it was possible England would face a revised total rather than a target of 284.

All-rounder Ben Stokes led England’s attack with three for 52 in a maximum 10 overs on his Durham home ground.

Leg-spinner Adil Rashid, whose eight overs in England’s series-levelling seven-wicket win at Trent Bridge on Wednesday cost an expensive 75 runs, bounced back well with two for 45 in 10 overs.

New Zealand opener Martin Guptill (67) and the in-form Kane Williamson (50) both posted half centuries, while Ross Taylor, dropped on 19, made 47.

Their total did see World Cup finalists New Zealand exceed their previous highest aggregate for a five-match ODI series of 1,460 runs set against India in 2014/15.

Any thoughts of a comfortable England chase would have been tempered by the fact that last year at the Riverside, batting second in similarly overcast conditions, they were dismissed for 99 by Sri Lanka in a 157-run ODI defeat.

After rain delayed the start, England captain Eoin Morgan saw his decision to field first rewarded with a wicket in the first over.

Williamson, whose previous scores this series were 45, 93, 118 and 90, again looked in excellent touch as he punched Finn off the back foot for four.

But he was out for exactly 50 when he bottom edged an attempted pull off Stokes.

Guptill too got to a fifty but, following an audacious uppercut six off Durham paceman Mark Wood, was caught behind trying to cut Stokes by Jonny Bairstow, deputising for Jos Buttler after England’s first-choice wicket-keeper was ruled out with a hand injury suffered while training on Friday.

New Zealand promoted Mitchell Santner up the order after his rapid 44 at Trent Bridge, which included four sixes in one Rashid over.

But Rashid turned the ball sharply to bowl left-hander Santner leg-stump for six as New Zealand’s 150 was transformed into 155 for four.

Rashid lured Grant Elliott (35) down the pitch with a googly and had the all-rounder stumped by Yorkshire team-mate Bairstow.

Then 210 for five became 212 for six with Taylor, who averaged over 93 for the series, well caught by a diving Bairstow off left-arm quick David Willey.