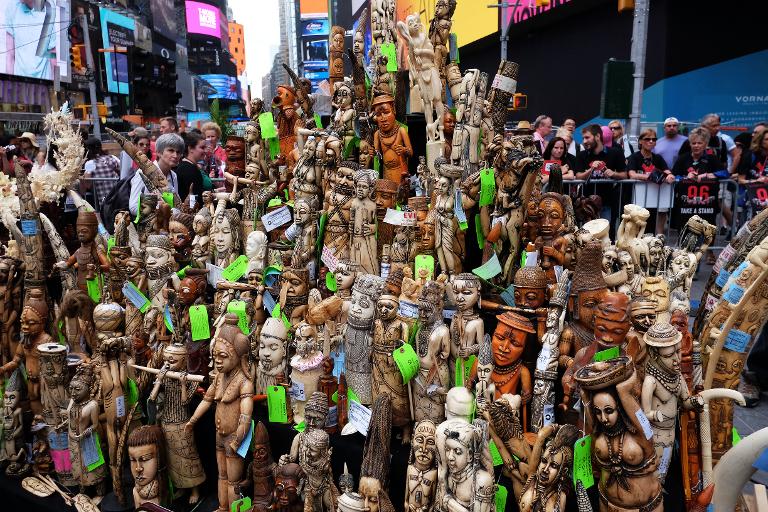 A ton of illegal ivory carved into decorative objects was destroyed in New York’s Times Square on Friday as US officials denounced poaching that kills thousands of elephants a year.

Under the gaudy neon lights of the most famous square in the world, the objects — most of them seized from the store of a jailed Philadelphia art dealer — were placed one by one on a conveyor belt before being dropped into the crusher to the sound of applause.

“Today’s ivory crush serves as a stark reminder to the rest of the world that the United States will not tolerate wildlife crimes, especially against iconic and endangered animals,” said US Secretary of the Interior Sally Jewell.

US officials say that between 2011 and 2014 the poaching of African elephants reached the highest level ever recorded.

In just three years around 100,000 elephants were killed for their ivory, Jewell said.

She said there was a growing demand for ivory, with international organized crime networks seeing it as a low risk, high-profit market.

Dozens of demonstrators held up posters in Times Square saying that 96 elephants fall victim to the illegal trade each day.

It was the second time that US authorities have staged a massive public destruction of ivory.

In November 2013, the US Fish and Wildlife Service, which comes under the department of the interior, organized the destruction of more than five tonnes of ivory in Denver.

Friday’s event was organized by the USFWS, the New York department of environmental conservation and animal-rights charities.

“Today’s message is this: We plan to crush the ivory trade and crush the profits of the traffickers,” said Cristian Samper, president of the US-based Wildlife Conservation Society, one such charity.

The WCS said other ivory destruction events had taken place across the world, including in Kenya, Zambia, China, Hong Kong and France.

The international trade in ivory was outlawed in 1989. It is also banned or severely regulated in a number of other countries.

The neighboring states of New York and New Jersey recently banned the sale and trade of ivory.

China is the largest market, accounting for more than 70 percent of worldwide demand in ivory, with the United States in second place.

According to a recent study, the situation is particularly alarming in Tanzania, which has seen a “catastrophic deline” in the elephant population from 109,051 in 2009 to 43,330 in 2014, leading wildlife trade monitoring group TRAFFIC said this month.

According to another recent study, demand means that a poacher can earn $3,000 per pair of elephant tusks, more than many annual salaries in Africa.

Elephant tusks are highly prized, particularly in Asia, where they are carved into ivory statuettes and jewelry.

An estimated 470,000 wild elephants remain in Africa, according to a count by the NGO Elephants Without Borders, down from several million a century ago.