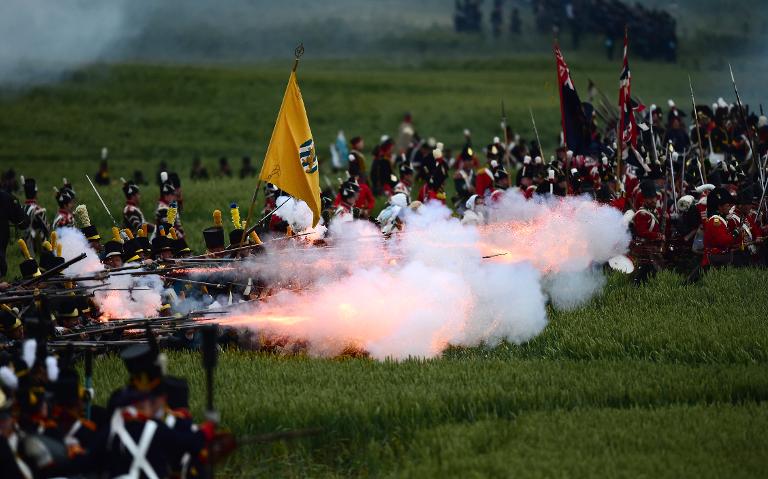 The sounds of war rang out on the fields of Belgium on Thursday as the Battle of Waterloo was restaged 200 years after the clash that ended Napoleon’s imperial ambitions and changed the course of European history.

In what was billed as the biggest re-enactment of its kind, 6,000 history enthusiasts from 52 countries in full costume acted out the July 18, 1815 clash between the French army and the allied British, Prussian and Dutch forces.

A day after European royals and politicians sent out a message of peace and reconciliation to a modern-day continent facing economic strife and conflict on its borders, it was time for the mock battle to start.

Around 60,000 spectators from around the world were on hand to watch a spectacle which had sold out months ago, seated in huge stands capable of housing more people than Belgium’s national football stadium.

Deafening cannon fire erupted from both sides as “troops” in full livery advanced across the same damp fields south of Belgium where 47,000 people were killed or wounded two centuries ago — this time to applause from the crowds.

“We love Napoleon,” said Kevin Michael, 25, from Cleveland, Ohio, who had flown over from the United States with his parents for five days especially to see the Waterloo bicentenary celebrations. “It’s like watching history.”

His father William Weston added: “We were reading about European unity and Napoleon wanted to unify the European people, but under the French.”

The filmic re-enactment was a far cry from the sombre ceremonies on Thursday’s anniversary of an event which still stirs passions in Europe and further afield.

“Waterloo, the folly and the grandeur. The horror and the genius. The tragedy and then the hope,” Belgian Prime Minister Charles Michel said in an opening address on Thursday.

Michel, whose government spent 10 million euros on the commemorations, called for reconciliation through the “European project” and its promise of peace despite modern-day challenges of conflict on its borders in Ukraine and economic worries in Greece.

But the mood was more celebratory on Friday, with spectators carrying French tricolore and British Union Jack flags, and stirring classical music pumped out over loudspeakers at tense moments.

They watched as the “soldiers” in lavish blue, red and gold uniforms acted out the course of the day-long battle — which the British Duke of Wellington described as “the nearest run thing you ever saw in your life” — over a two hour show.

First came the French cannon fire and the advance of both cavalry and infantry on the orders of Napoleon, played by Parisian lawyer Frank Samson, wearing the emperor’s distinctive two-horned black hat.

“The dead were decapitated, mutilated,” said the breathless commentator describing the battle to the crowd.

But as smoke drifted across the battlefield, the Duke of Wellington’s allied forces held fast at two replicas of the famed Haie Sainte and Hougoumont farmhouses, just as they did on that damp day in 1815, despite volleys of musket fire from the French.

The troops marched to fife and drums and, were it not for the planes flying overhead from Brussels airport, the scene could have almost been from 200 years earlier.

– Napoleon defeated, then on Belgian TV –

In the end, as in real life, Napoleon was defeated. In 2015, however, he went on to be interviewed by Belgian television.

Belgian newspapers later complained that the show was too loud, a view echoed by some spectators at the event.

Yet for all the sound and fury the re-enactment could not capture the full horror of a battle that altered Europe’s fate forever.

While around 12,000 died on that day alone many more died of horrific injuries or infections in the days that followed the end of Napoleon’s ill-fated drive north in 1815.

The battle pitted around 93,000 French troops led by Napoleon against 125,000 British, German and Belgian-Dutch forces under the Duke of Wellington and Field Marshal Bluecher.

Defeat saw Napoleon exiled to Saint Helena in the south Atlantic Ocean, where he died in 1821.

The victors then redrew the map of a Europe which enjoyed almost a century of relative peace until the carnage of World War I.

On Wednesday, British heir to the throne Prince Charles unveiled a memorial at the Hougoumont Farmhouse, where allied forces fought off repeated French attacks as Napoleon desperately sought to break their lines.

In contrast France only sent an ambassador to Thursday’s ceremony, and kicked up a fuss in the preceding weeks after Belgium tried to mint a commemorative euro coin featuring the battle.