Home Sports Spieth the master makes charge at US Open 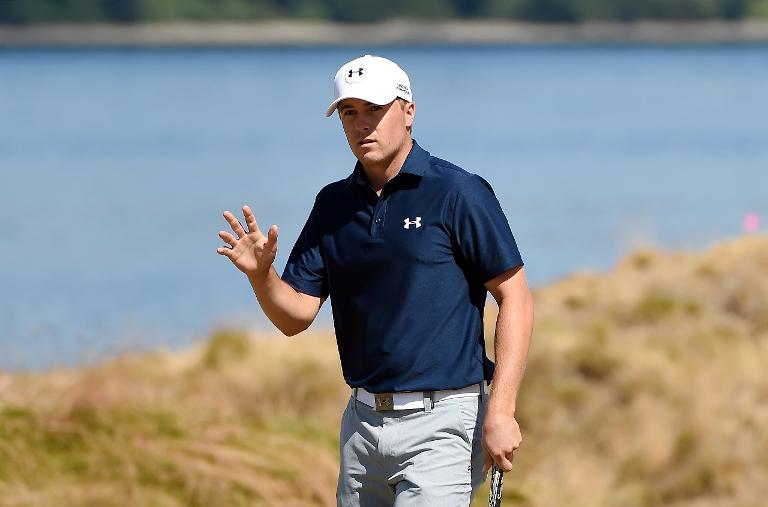 Masters champion Jordan Spieth is once again proving he can shine on the biggest stage as he surged up the leaderboard at the US Open on Friday.

Spieth, who posted a wire-to-wire victory at Augusta in April, seeks to become the first man to sweep the Masters and US Open since Tiger Woods in 2002.

On a day when Woods headed out the door after struggling mightily at Chambers Bay, Spieth shot a three-under 67 in the second round.

Starting at the tenth, Spieth birdied three of four holes beginning at 14 to eventually move to the top of the leaderboard tied at five-under with overnight leaders Henrik Stenson and Dustin Johnson.

Stenson and Johnson, who each had 65s on Thursday, both had afternoon tee times.

“If you shoot in the 60s at a US Open you are going to be pleased,” Spieth said. “I will draw on my experience at Augusta but my patience here has to be that much higher.

“At Augusta I was making everything. It would be nice if I could do that here. This course is going to get tougher and tougher.”

South Africa’s Branden Grace also climbed up the leaderboard with four birdies and an eagle to shoot 67 and finish 36 holes at four-under 136, just one stroke back of Spieth.

American Daniel Summerhays, whose only previous appearance in the US Open resulted in a missed cut five years ago, also made a charge with a three-under 67.

The Queensland native was treated by medial staff on the course before finishing out the hole despite obviously being still woozy from the fainting spell.

The USGA tried to toughen up the course Friday by extending it to 7,695 feet, making it the longest in US Open history.

The front nine alone was 4,020 feet. They also made the first hole a par-five instead of a par-four and altered 18 to a tricky par four.

Spieth had some nice up and downs Friday but even the best putter in the world had trouble reading some of the greens at the quirky links-style Chambers Bay course.

The Texan made double bogey on the 514-yard par-four 18 and said he was not pleased with the changes to it, calling it “a dumb hole.”

“The hole doesn’t make sense to me,” said Spieth, who opened with a 68 Thursday.

Coming into the tournament Spieth was viewed as having a local advantage because his caddie Michael Greller, started his career at Chambers Bay.

Spieth, who started his second round on the back nine, hit his approach on 10 to the back of the green but the ball rolled down the hill to about five feet.

He made that putt for his first birdie of the day, a sign of good things to come.

He had a nice up and down on 16 to save par and then made an eight foot putt for birdie on 17 to take the lead.

After his double bogey debacle on 18, Spieth had another workman-like up and down to save par on the par-four 486 fifth after his approach found the bunker to the left of the green.

The starting field of 156 golfers will be cut after 36 holes to the low 60 scorers and ties.

Former world number one Woods will be the biggest name to miss the cut as the 14 time major winner stumbled to a six-over 76 for finish 36 holes at 16-over 156.

Friday’s 76 was just a slight improvement over the confidence-crushing 80 he shot in the opening round.

Grace, who is making his third appearance in a US Open, got off to a strong start with a birdie on No. 1 and then made back-to-back birdies on eight and nine to move into contention.

The Pretoria native, who has eight worldwide victories, had two more birdies on the back nine at 12 and 17.

Six of his wins have been on the European Tour with the last coming in January at the Qatar Masters.

World number one Rory McIlroy also had an afternoon tee-time and he was looking to make up some ground after carding a frustrating 72 in the opener.

Six-time US Open runner-up Phil Mickelson and defending champion Martin Kaymer joined him as part of the afternoon crowd.