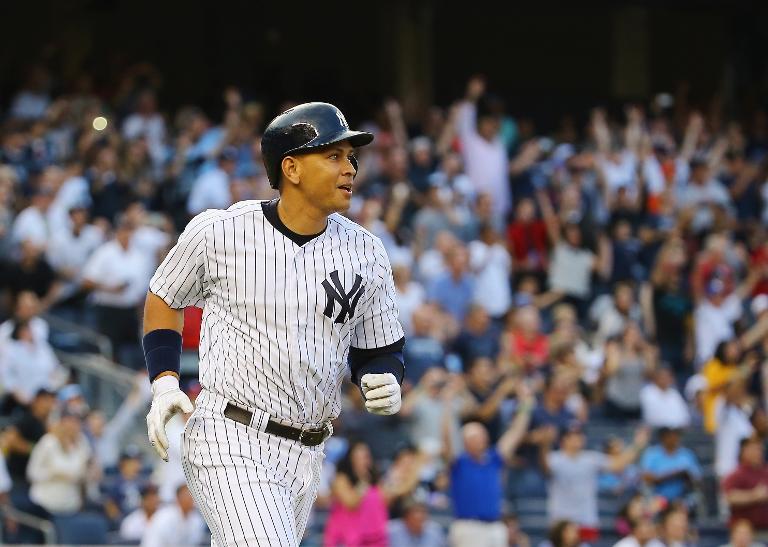 The 39-year-old infielder, whose batting feats have been tainted by two doping scandals, smashed a solo homer off the first pitch he saw, a first-inning fastball from Detroit’s Justin Verlander, for the historic hit.

“It’s a magical number, 3,000,” Rodriguez said. “I’ve been watching baseball and a lot of it since I was five years old. It’s a special number. I’m very happy to be in the club.”

It was the fourth time in as many games against Verlander that Rodriguez blasted a homer, improving him to 11-for-29 lifetime off the Tigers right-hander with five homers.

“I knew he would challenge me,” Rodriguez said. “I was fortunate to get a good pitch and put a good swing on it.”

For the night, Rodriguez went 1-for-4 at the plate and the Yankees defeated Detroit 7-2, ending a long day after a sleepless night.

“I found myself staring at the ceiling at four in the morning,” Rodriguez said. “I probably slept two hours.”

Rodriguez returned this season after serving a 162-game suspension for doping violations linked to the Biogenesis steroid scandal. In 2009, Rodriguez had admitted to using banned performance-enhancing substances from 2001 to 2003 while with the Texas Rangers.

But after sitting out the entire 2014 campaign, “A-Rod” has been knocking off major league milestones.

Rodriguez became only the third player to smash a homer for his 3,000th hit, joining Wade Boggs and Derek Jeter, the former Yankee teammate of Rodriguez who retired last year and the only prior player to reach 3,000 in Yankees pinstripes.

The blast into the right-field stands, the 13th homer of the season for Rodriguez, was greeted with loud cheers and a standing ovation from fans at Yankee Stadium and “A-Rod” made a brief curtain call to acknowledge the applause.

“We’re very excited for him and very happy for him,” Yankees manager Joe Girardi said.

“It’s a big moment. He’s swinging really well. He worked hard. He never stopped believing he could do this. He just did his work and believed in himself. That’s a big reason why he’s having this success.”

Rodriguez said the moment was extra special for having his daughters behind home plate to see it and have him see them as he rounded third base and trotted to home plate.

“That was pretty cool,” Rodriguez said.

In part because of his lengthy ban as part of the Biogenesis controversy, Rodriguez had 2,116 days between his 2,500th and 3,000th hits — the longest-such gap in major league history.

Rodriguez joined Mays and Hank Aaron as the only players in major league history with 3,000 career hits and 600 career homers.

Rodriguez is signed with the Yankees through the 2017 campaign and if he plays long enough, he could threaten the all-time homer mark of 762 by Barry Bonds, whose feats have also been regarded by many as tainted after his trainer was among those involved in the BALCO steroids scandal.

“Congrats AROD on joining the elite 3K club. You made history today and brought the Yankees house down,” Bonds tweeted to Rodriguez.

Rodriguez and the Yankees remain at odds over a $6 million bonus payment that the slugger believes he is owed for tying Mays on the home run list.

The Yankees argue he should not receive a bonus because his drug-tainted past means the achievement isn’t marketable, although both parties have reportedly agreed to set aside that dispute for the time being — with Major League Baseball agreeing to waive a 45-day deadline for Rodriguez to file a grievance.