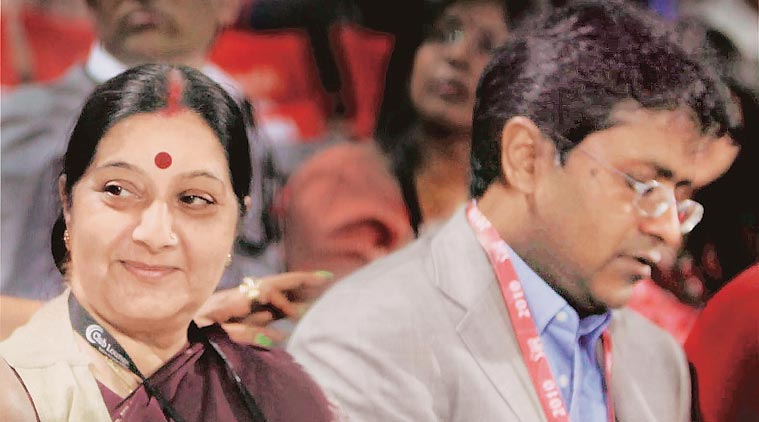 ProtestsÂ were reported from various parts of the country late on Friday against External Affairs Minister Sushma Swaraj for her alleged assistance to former IPL chief Lalit Modi, who is wanted by officials for his involvement in a graft case.

Indian media reported that Swaraj had last year asked British authorities to examine a request to provide travel documents to Modi, at a time when his passport had been revoked by New Delhi.

Swaraj has denied the allegations and said on social media she was helping Modi, who is based in London, on “humanitarian grounds” as he needed to visit his ailing wife in Portugal.

Modi was suspended as the head of the cash-rich Indian Premier League cricket tournament in 2010, following allegations of corruption that also ensnared politicians.

The women’s wing of the Congress Party in Bhopal issued an ultimatum to Prime Minister Narendra Modi to remove Swaraj from her ministerial post.

“We demand Narendra Modi sack Sushma Swaraj. If he fails to do so, we will continue our protest and sit on a hunger strike and burn effigies,” said Gita Mishra, secretary of the Madhya Pradesh Congress women’s wing.

“Everything is not okay within the BJP. On the 40th anniversary of the emergency, the BJP is against the reinstatement of democracy. This fight is with regard to internal democracy of the party, which is slowly disappearing in the BJP,” said Janata Dal (United) leader K.C.Â Tyagi.

Aam Aadmi (Common Man) Party leader Ashish Khetan said, “Prime Minister Modi’s Government, which is known to be close to Lalit Modi, all ministers and chief ministers are all hand in glove with Lalit Modi, even they are unable to deny that Lalit Modi is clean. In fact, they are agreeing that he has allegations against him. I feel that Lalit Modi is giving the whole matter a political colour and trying to escape the law. If he is indeed honest and clean, he should come back to the country and face the law.”

Swaraj did not answer phone calls to her home. A foreign ministry spokesperson said he had no comment to make at this stage. Lalit Modi could not immediately be reached for a comment.

Prime Minister Narendra Modi, who is not related to Lalit Modi, has not commented on the issue so far, but senior BJP leaders have publicly backed Swaraj.Â