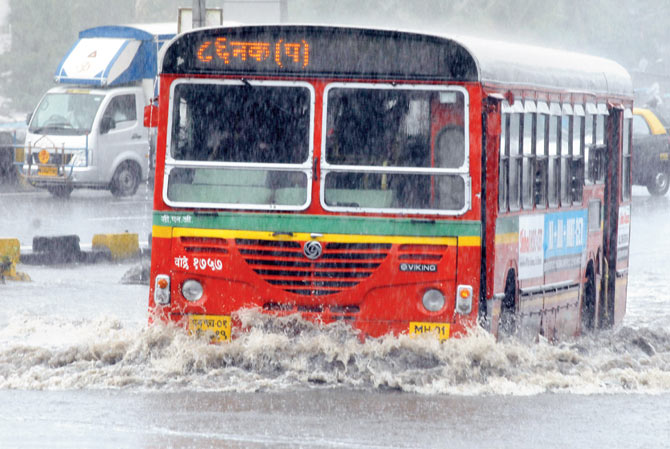 Mumbai: It has finally stopped raining in Mumbai. The waterlogged streets are now beginning to slowly drain out, with the water filled in the streets showing signs of receding.

Life in Mumbai was back on track with train services being restored on all the three suburban lines though more rains have been forecast for Saturday.Â Thereâ€™s more to follow.

However, ignoring the drizzle, men and women streamed to suburban stations around the sprawling Metro to head for their offices and other places of work which remained shut on Friday.

A statement issued by Central and Western Railway said that all suburban services were running as per normal schedule including Harbour line and Trans-Harbour line in Central Railway.
Â

On Friday, Mumbai received 15 daysâ€™ worth rain in one day, filling up the roads and bringing life to a screeching halt. The good news for Mumbaikars, however, is the fact that train services have begun operations and Western tracks have no waterlogging, with the Harbour and Trans Harbour lines operating as per schedule, while Central lines have reported that the water from the tracks is receding steadily.

Despite normalcy slowly creeping back, shaking off the rain water bravely, Mumbaikars are still asked to stay indoors. “We have advised people not to go out and remain indoors on Saturday,” said Mumbai’s civic body chief Ajoy Mehta.

Why did this happen?

While people are busy expressing their anguish, the buck readily and steadily passing around, letâ€™s understand why the whole water saga happened yesterday.

Fridays showers measured over over 500 mm in 24 hours. The cityâ€™s drainage system is only capable of handling a tenth of it.

A boulder fell near one of the gates at the Cleveland Bunder Pumping Station in Worli, preventing it from shutting completely which allowed a lot of sea water to flow into the city.

Even though the rains have stopped temporarily and things are slowly getting back on track, Mumbaikars, avoid unnecessary outings. Also, remain calm and do not spread rumours. If you hear anything, verify before believing.