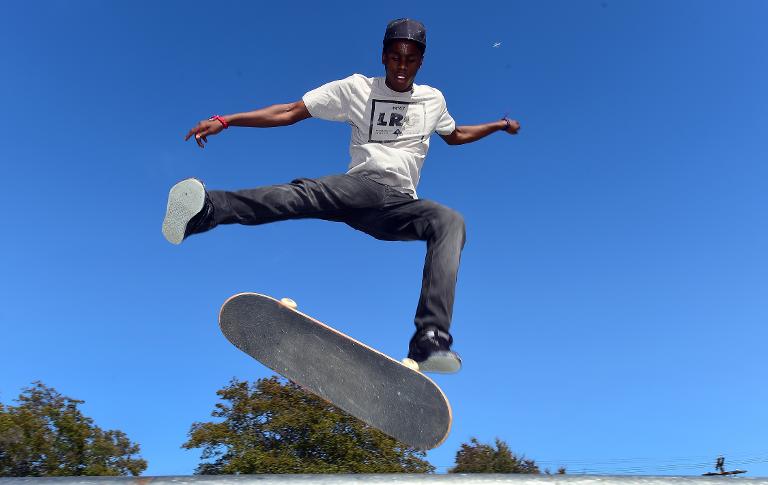 The movie “I am Thalente” — a tale that rolls from the South African city of Durban to the skate parks of Los Angeles — scooped the Audience Award for Best Documentary at this year’s Los Angeles Film Festival.

Directed by Natalie Johns, the film centers on the life of young Thalente (pronounced talent) Biyela, a charismatic teenager whose skateboarding skills have shaped his destiny.

At just nine years old, Thalente found himself living rough to escape an abusive stepfather. He slept on street corners and in the back of a pickup truck.

It was around the same time that a friend gave him his first skateboard.

Quick to master tricks and new skills, he went on to catch the eye of Tammy, a young woman who is friends with the film’s director and who offered to give him shelter.

“I was planning to do a video to help him get some sponsors and when I listened to it, I was blown away by his philosophy of life and his positive attitude,” Johns told AFP during an interval at the festival, which ended Thursday.

She then hit on the idea of making a documentary about Thalente, while at the same time trying to help him and nurture his skills.

“I’ve always been shocked, for as long as I can remember, by the disparity” between social classes in South Africa, Johns said.

“I come from South Africa and we have a huge child homelessness issue.”

Over the course of the three years covered in the documentary, we see Thalente learning to read, meeting professional skateboarders, and competing for the first time in a US skating competition.

And we see him sliding, grinding and flipping his board in LA skate parks. He shows natural ease at the sport, but also perseverance and determination to learn new tricks.

Today, Thalente is 21 and lives in Los Angeles, where he teaches skaters. He has a bright smile and is sponsored by skate firms, and tells his story at conferences across the United States.

Johns hopes that her film will show that by helping disadvantaged kids explore their abilities, one can help them build their confidence and futures.

The filmmaker also wanted to change how people look at street kids — a goal shared by Thalente.

“But you don’t know why he came to do this. You think people like begging like stealing?”

Thalente says he was able to survive on the streets by avoiding gangs and drugs and surrounding himself by good people.

“I just kept the right people around me, kept a positive attitude and not let things get to my head and try to think one day at a time,” he said.

Not surprisingly, he also paid tribute to skateboarding, especially the close-knit community of skaters, who he likened to family.

Thalente now is an important part of the skating community in Los Angeles, a mecca for the sport.

“It’s like a brotherhood,” he said. “We’re very family-oriented we’re always with friends together.”