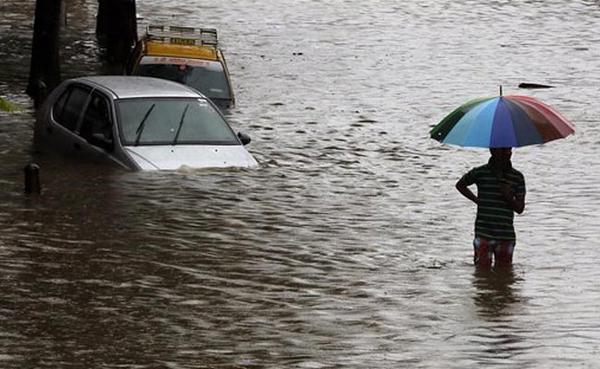 Mumbai: The situation is likely to get worse inÂ MumbaiÂ on Saturday as more rainfall accompanied by strong winds has been predicted by the Indian Meteorological Department (IMD).

As per IMD, heavy rainfall may hit Mumbai, coastal Konkan and other parts over the next two-three days. The department has also issued warning of high tides up to 4 meters around 3:12pm.

â€œIf there is heavy rains, it could create further problems,” Director of weather forecast at IMD, Mumbai, VK Rajeev was quoted saying.

Furthermore, two people, Ranjit Gupta, 60, and Gaurav Karnik, 5, living in a building in Wadala, were killed on Friday after they got electrocuted by loose live wires.

Life in India’s financial capital came to a standstill as heavy rains lashed several parts of the city and surrounding areas on Friday, barely a week after the monsoon set in in the region.

The city had recorded another 72 mm rainfall till Friday evening, and 66 mm and 50 mm downpour in the eastern and western suburbs respectively.

Considering the situation in Mumbai, schools and colleges have been asked to remain closed today.Â

Personnel of the National Disaster Relief Force, Territorial Army, Mumbai Police, fire brigade, home guards and other agencies apart from Indian Navy ships and helicopters were on standby along with boats, life rafts and other equipment to tackle any emergency.

Rain crippled the Mumbai lifeline – the suburban railway network – as rainwater waterlogged the tracks, preventing lakhs from commuting to and from their homes and workplaces.