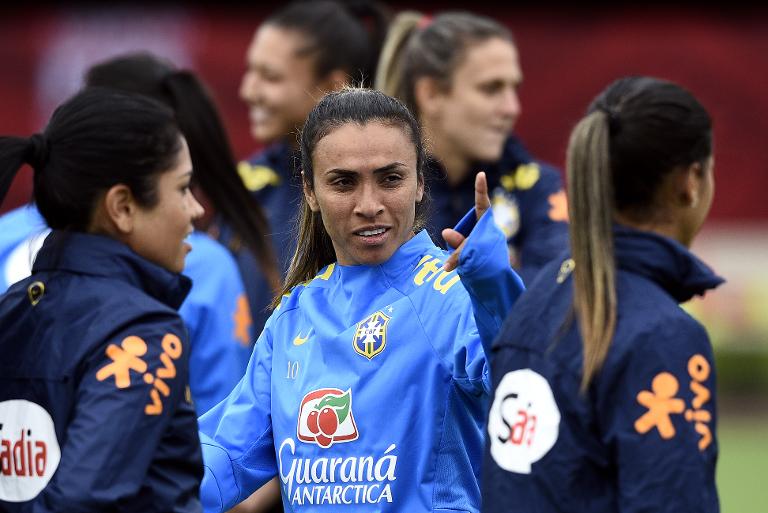 Superstar forward Marta returns as Brazil bid to maintain their winning momentum at the Women’s World Cup against Australia on Sunday, with France and Canada also in action in the last 16.

Third-ranked France will be up against South Korea in Montreal while hosts Canada play Switzerland over on the west coast in Vancouver.

“Australia are a very competitive team, very intense players,” said Brazil coach Vadao of their 10th-ranked opponents ahead of the game in Moncton.

“We’re going to face a very strong rival. It’s sudden death and we can’t afford any mistakes. We have to fine tune and every detail is going to be very important.”

Marta did not play in the 2007 runners-up final group game against Costa Rica, because of a slight injury, along with stalwarts Cristiane and Formiga.

But Vadao insisted: “Marta will play on Sunday I can tell you that for sure.”

The 29-year-old former five-time world footballer of the year is bidding to add a first world title to her trophy cabinet.

“I will continue fighting, as I always did. I will do everything possible to try to return to Brazil with the expected results,” she said.

The record Women’s World Cup goal scorer now has a dual responsibility — to be an inspiration on and off the pitch.

“It is logical that now I have a greater responsibility. In the group there are many girls who watch everything I do. I have a good relationship with all of them.”

Alen Stajcic’s Matildas face a tough task against a Brazil who won all three of their group games and are yet to concede a goal.

Captain Lisa De Vanna will be one of the key players for Australia who finished second in their group behind the United States.

“It’s going to be a tough match but we’ve already made it out of the group of death supposedly,” said Australian midfielder Tameka Butt.

“Marta is definitely a big player and someone we have to watch out for,” added striker Michelle Heyman.

“But the way we structure and our game plan, if we stick to how we play football I think weâ€™ll be alright.”

France, meanwhile, started their campaign off with a confident 1-0 win over England, but came crashing back to earth with a 2-0 defeat to Colombia.

But Philippe Bergeroo’s side got back on track with a 5-0 whipping of Mexico which saw them advance top of their group F.

The only previous meeting with the Koreans was at the 2003 World Cup and the French won 1-0.

“They like movement and possession but it’s not a very powerful team like the United States and Germany can be,” estimated midfielder Camille Abily.

This is France’s third World Cup and they finished fourth in 2011.

While the top Asian sides are Japan, China, or even North Korea, the South Koreans are not used to the world stage, with their only previous appearance in 2003.

“I think it’s an important day for South Korean women’s football,” said coach Yoon Deok-yeo after his side emerged from the group stage.

“I feel they can have a great match against France who are a very strong opponent and among the leaders in the soccer world.”

Hosts Canada, whose best finish was fourth in 2003, are looking to get their home crowd behind them against newcomers Switzerland in BC Place Stadium.

Canada finished top of their group while Switzerland are back in as one of the four best third-place finishers.