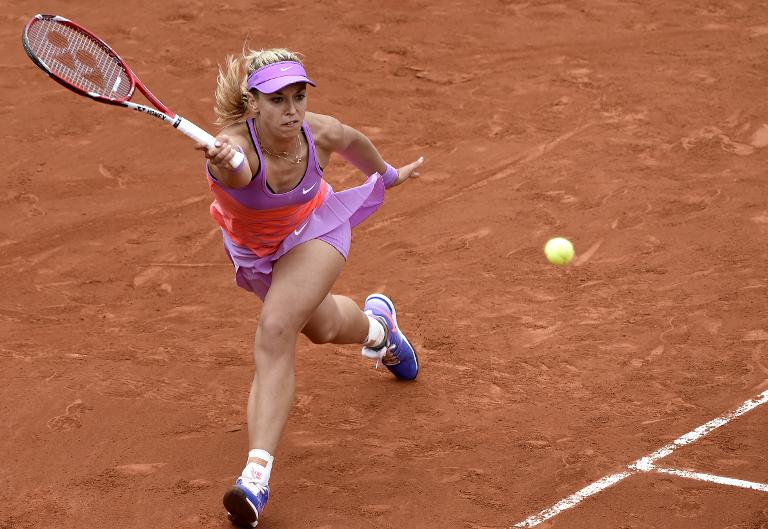 Simona Halep, the top-seeded Romanian, became the latest and most notable casualty of many at this week’s Wimbledon warm-up event in Birmingham, but the record-breaking Sabine Lisicki stormed into the semi-finals.

Although both have serious grass-court ambitions, Halep only patchily showed what she is capable of as she was ousted by Kristina Mladenovic, the third-best French player and ranked outside the top 40, whose career-finest result came by 2-6, 6-0, 7-6 (7/4) in a topsy-turvy match.

By contrast Lisicki recovered from letting slip a 5-2 lead in a repeat of the 2011 final against Daniela Hantuchova, delivering another 10 aces in a 7-6 (7/2), 6-2 win that brings the powerful German’s three-match total to 45.

The 27 aces Lisicki served in her opening match was a record on the WTA Tour, and Friday’s success against the former world number five from Slovakia underlined that in her calmer moods and with more consistency all things are possible for her on grass.

Despite this it was the 22-year-old Mladenovic, with her forcing first serve, a dangerously flat forehand, and decent volleys, who announced herself as a new front-line force on grass courts.

She turned the second set around in only 20 minutes after Halep had been by far the more assured player on the first, and then overcame the disappointment of failing to close out the match at 5-3 in the decider.

Mladenovic also had to survive any number of curious incidents to get over the line. She needed two successful video reviews in the third game of the final set to overturn decisions which would otherwise have cost her a service game.

She also saw the umpire incorrectly over-ruling a line judge’s decision, apparently putting Mladenovic love-30 up on Halep’s serve at 5-4 in the final set — only for that to be over-ruled as well after an appeal, by Halep this time.

Two points later Mladenovic watched her drive hit the net tape, with the ball taking a long look at falling over, only to fall back. Had it gone the other way she would have reached match point 25 rallies sooner, and avoided many agonies.

At her moment of triumph she dropped her racket in amazement and pleasure, and wandered half-delighted, half-disbelieving to the net.

Just as she had against Eugenie Bouchard, the fifth seed, and Barbora Strycova, the tenth seed, Mladenovic had proved how good she can be on this surface.

“Of course today was an amazing match and a big win for me,” Mladenovic commented. “I beat Simona before and did a few wins against top-10 players, but it is definitely great to beat someone like her now.

“She was very solid in the first set and I was definitely not in any rhythm. In the second set I tried to start over again, and in the third I thought it was a quality match with both of us playing well.”

Mladenovic now has a very different task than that against the creative ground-stroking and scampering aggression of Halep, because she now plays the tall steep-serving sixth-seeded Karolina Pliskova.

The 23-year-old Czech is the youngest top 12 player and still improving, as she showed during her 6-2, 6-2 win over Carla Suarez Navarro, the third-seeded Spaniard whose skills are at the moment better suited to clay.

“I’m very pleased about having all these great wins against top players,” Mladenovic said. “I think it’s a very tough exercise to handle all the pressure to continue to win after big wins like this. But I shall be trying.”

Despite this, even more uncertain doubts about coping with unexpected pressure came from Lisicki, who now has an all German semi-final with Angelique Kerber, the fourth seed.

“I didnâ€™t sleep well, because people were coming in and out (of their rooms) and slamming the doors,” Lisicki said. “So I just hope they are not there tonight.

“I always play quite well in England,” the former Wimbledon finalist added. “And I wouldn’t mind another title here on grass.”