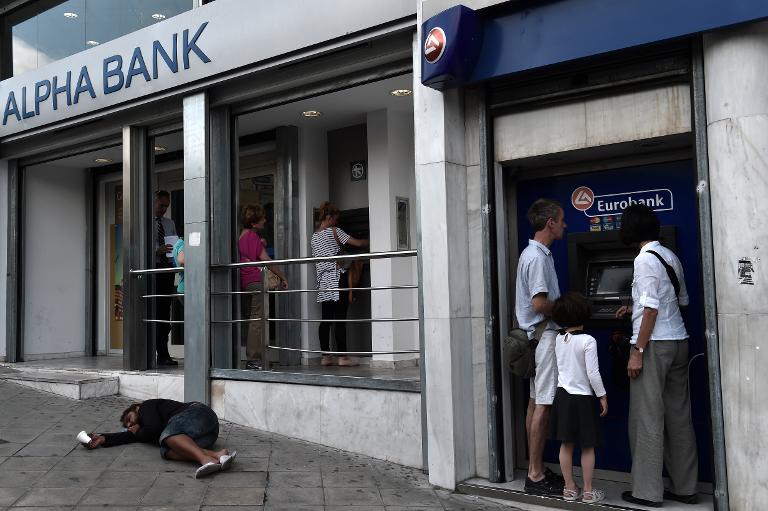 Athens said it was still hopeful for an 11th-hour deal to stop it defaulting on its debt, as despairing Greek savers withdrew their cash from the country’s troubled banks ahead of fresh talks next week.

“Those who invest in crisis and terror scenarios will be proven wrong,” Prime Minister Alexis Tsipras’s office said, even as reports surfaced that Greece’s banks had been forced to seek a new injection of liquidity from the European Central Bank.

Greece has less than two weeks to break the deadlock in talks with its creditors to unlock the last 7.2 billion euro ($8.1 billion) tranche of its international bailout or face a messy exit from the euro and even the European Union.

Ahead of a fresh round of emergency talks between Athens, the EU, ECB and IMF scheduled for Monday, Greeks reportedly stepped up withdrawals from the nation’s troubled banks despite the central bank insisting the financial system was stable.

Sources said the Bank of Greece appealed to the ECB, which increased the emergency liquidity level available to Greek banks on Friday. State agency ANA reported the funding cap was raised by 3.3 billion euros.

EU President Donald Tusk called an emergency summit of the leaders of the 19 eurozone countries in Brussels after finance ministers failed Thursday to break the five-month deadlock between Greece’s anti-austerity government and its international creditors.

French President Francois Hollande insisted Friday that “everything” must be done to seal a compromise on the Greek debt crisis.

We must “do everything to relaunch negotiations, so the talks can achieve a compromise, but one in line with European rules,” said Hollande.

Economic powers outside the eurozone were also watching the situation with growing alarm, with the United States saying there is “an urgent need for both Greece and its international partners to take steps towards compromise”.

Meanwhile, in a move that seemed calculated to irk other European leaders amid tensions with Russia over Ukraine, Tsipras visited Saint Petersburg as the star guest at President Vladimir Putin’s investment drive forum.

While a Kremlin spokesman said no offer was made of any Russian aid for cash-strapped Athens, the two leaders sealed a preliminary agreement to set up a joint venture to extend the TurkStream gas pipeline through Greece.

Tsipras also used his keynote speech at the forum to launch an attack on the EU, saying the debt crisis is “not a Greek problem, it’s a European problem”.

“The problem is not called Greece, the problem is called eurozone and it concerns its structure,” the Greek leader said.

Greece’s creditors have refused the pay the final slice of its bailout without reforms left-wing Tsipras’s government has rejected as too harsh, including cutting pensions and higher taxes. Without the money, however, Athens is likely to default on a 1.6 billion euro payment to the International Monetary Fund due on June 30.

Greece must pay another 6.7 billion euros to the ECB in July and August. There have been reports of plans to enact capital controls if Athens’ financial system runs dry.

Analysts have warned a default may set off a chain of events leading to a “Grexit” of Athens from the eurozone, with senior European financial figures warning this week it could even see Greece leave the European Union.

Negotiations over the reforms have become increasingly acrimonious as the prospect of a default has solidified, with both sides accusing the other of intransigence and making unreasonable demands.

“We are close to the point where the Greek government will have to choose between accepting what I believe is a good offer of continued support or to head towards default,” he said in a video message Friday.

Tsipras, who was elected on an anti-austerity promise in January, warned in turn that Greece’s exit would lead to the undoing of the euro.

“The famous Grexit cannot be an option either for the Greeks or the European Union. This would be an irreversible step, it would be the beginning of the end of the eurozone,” Tspiras told the Austrian daily Kurier on Friday.

Tsipras’s own office was more conciliatory, adding in Friday’s statement: “We hope that the final negotiations take place at Europe’s highest political level and we are working toward the success of this summit.”

The Athens stock exchange ended the day up 0.57 percent after falling sharply earlier in the week.

As officials remained deadlocked over Greece, the IMF on Friday approved a new loan instalment for Cyprus of 278.4 million euros, now the only other eurozone country receiving its bailout support

As with Greece, the negotiations between Cyprus and the so-called troika — the IMF, European Commission and ECB — had bogged down over the economic reforms demanded by the creditors in exchange for the financing.