Home Business Flipkart-Snapdeal war, who will Snap or Flip first? 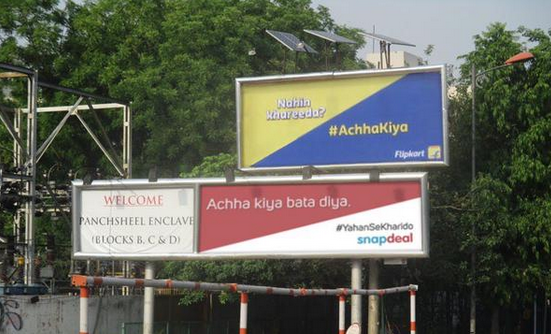 New Delhi: E-commerce companies just canâ€™t get enough of each other. Itâ€™s an all out open war â€“ both online and offline.Â Much to the amusement of everyone, this time around it is Snapdeal taking on Flipkartâ€™s ad campaigns.

With some witty ambush marketing Snapdeal has made a mockery of Flipkartâ€™s latest #AchhaKiya campaign.

For the last three days, Flipkart has been aggressively pushing its â€œAccha kiyaâ€ campaign on its website, and through television advertisements, and hoardings across the country with the tagline â€” â€œAccha kiya jo nahi khareeda (Good thing that you didnâ€™t buy) â€” Flipkartâ€™s surprise price for those who wait.â€ Snapdeal instantly jumped to the opportunity and countered the tagline with â€œAchha Kiya bata diya â€” yahan se khareedoâ€ (good thing you told us â€” buy from here).

The Internet came alive after the clash and when a user asked Snapdeal â€˜but why?â€™, Snapdeal double-trolled Flipkart by making a pun on their latest â€˜wish chainâ€˜ campaign:

Snapdeal took the war to the streets too. The company is said to have strategically placed hoardings with the same tagline just below Flipkartâ€™s campaign.

This is not for the first time that country’s leading e-commerce companies are engaged in a social media war.

Earlier, the CEO’s of the two shopping giants were involved in a showdown on Twitter.Â

There are many more cases of ambush marketing in startup ecosystemâ€”the most recent being between theÂ Zostel and OYO rooms and before that between Commonfloor and Housing.