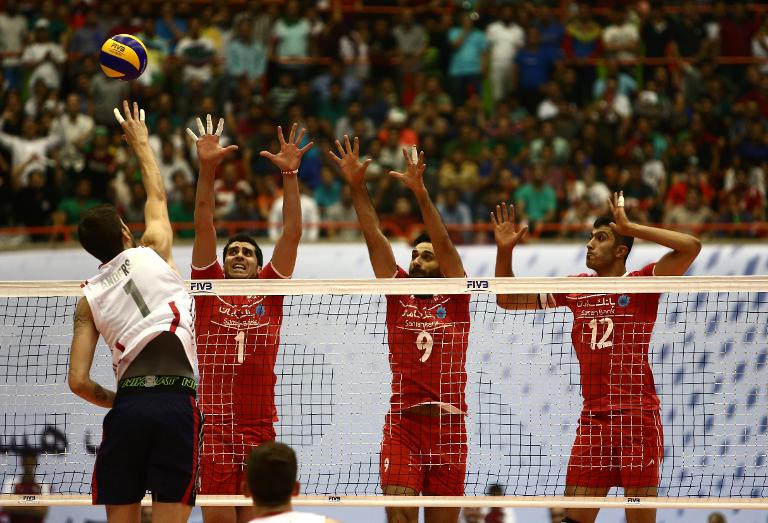 One of Iran’s female vice presidents launched a furious attack Saturday on “sanctimonious” groups whose threats of violent confrontation at a volleyball match ultimately triggered a clampdown on women spectators.

The remarks from Shahindokht Molaverdi, who had to backtrack on plans to ease restrictions on women at male sporting events, could inflame the government’s row with religious hardliners who oppose such reform.

Volleyball has become hugely popular in Iran as the national team has risen up the sport’s rankings and women were allowed to watch it until a ban was imposed in recent years.

The issue of female attendance peaked Friday, before the first of two matches in Tehran against the United States in the sport’s World League.

The debate continued afterwards, somewhat clouding the home team’s easy 3-0 victory over its longtime political foe, but with whom a nuclear deal due by the end of this month could begin to repair relations.

Molaverdi, responsible for women and family affairs in the Islamic republic, last week said some female supporters would be allowed to watch the match. But security officials later contradicted her and said no attendance policies had been changed.

Streets surrounding the Azadi Sports Complex were heavily policed on Friday, with officers forbidding women from going nearer the venue.

And although 200 special tickets for women were printed, an Iranian volleyball official told AFP the accreditations were not authenticated by security forces at the arena, and were thus invalid.

A few women pictured on social media watching the match were not Iranian, the Fars news agency reported Saturday, but from the Russian, Italian and Hungarian embassies in Tehran.

In the aftermath, Molaverdi hit out at the curbs, writing on Facebook that the government had respected the views of religious leaders while trying to respond to “the legal demands of another section of society”.

She then cited unnamed groups, accusing them of “sparing no effort to spread the seed of despair.”

Such opposition came “from those who were denounced two years ago by voters, and who had crawled into their cave of oblivion for eight years”.

The comments, confirmed by Molaverdi’s office as genuine, suggested she was drawing a contrast between the plans of President Hassan Rouhani, regarded as a moderate, and the hardline two-term tenure of his predecessor, Mahmoud Ahmadinejad.

Molaverdi said publication of such notices by “those who call themselves followers of God… and which used words that one loathes to repeat, clearly constitute several offences under the law.”

A “crowd of sanctimonious people who published one notice after another denouncing the modest and decent girls and women of this land” who “talked of confrontation used obscene and disgusting insults that only befit themselves,” Molaverdi wrote on Facebook.

“Even if one day our beloved girls and women forgive this crowd, they will never forget them and keep these days in their historical memory.”

Unlike football, women were allowed to attend male volleyball and basketball matches until a few years ago, and there is no need to change the law, Molaverdi added.

Earlier this month, Ansar Hezbollah, a radical Islamist group in Iran, said the government should reconsider its plans or face protests.

And in a sign of the tension, Ahmad Salek Kashani, head of parliamentâ€™s cultural commission, told Ansar Hezbollahâ€™s weekly magazine: “Women who are allowed to enter the stadiums, what are they going to watch? Is it anything other than menâ€™s bodies that have been left bare because of sports clothes?”

A second match against the United States will take place on Sunday.