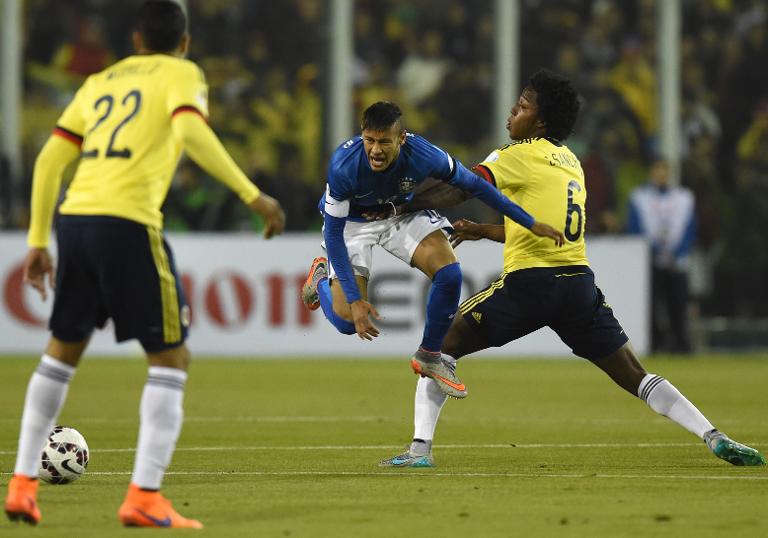 Brazil superstar Neymar was dramatically thrown out of the Copa America as Chile shrugged off the drunk-driving controversy surrounding Arturo Vidal to power into the quarter-finals.

Neymar’s participation in the South American footballing showpiece came to an abrupt end after a disciplinary hearing slapped him with a four-match ban for headbutting a Colombian opponent.

The punishment deprives the tournament of one of its most recognizable stars and leaves Brazil in turmoil as it contemplates the remainder of the tournament without their captain and best player.

Neymar’s fate had been in the balance after he was given a red card for headbutting an opponent during a post-match brawl that erupted after Brazil’s 1-0 upset loss to Colombia in Group C on Wednesday.

The 23-year-old superstar was already ruled out of Brazil’s final group game against Venezuela on Sunday after collecting a second yellow card of the tournament against the Colombians.

Neymar, who was also fined $10,000, can appeal the punishment. But unless the ban is reduced it means he has played his last game of the Copa, with Brazil having at most four games left.

Alberto Lozada, a member of the disciplinary committee, revealed Neymar had received a heavier punishment because he had abused match officials in the tunnel following his dismissal.

“Worst of all was that after the match he waited for the referee in the tunnel and insulted him, which aggravated the matter and led to the longer ban,” Lozada told Brazilian media.

“This constituted an act of aggression which required punishment of more matches.”

Neymar’s shock early departure marks a stunning fall from grace for the young forward, who had been carrying his nation’s hopes as they chased a first Copa America crown since 2007.

There was already bad blood between Neymar and the Colombian team heading into Wednesday’s match.

However Neymar arrived in Chile brimming with confidence and good form following a starring role in Barcelona’s treble-winning season, scoring the final goal in the Spanish giants’ Champions League victory over Juventus in Berlin on June 6.

The Brazilian was also in sparkling form against Peru in his country’s opening game of the tournament, scoring one goal and setting up an injury-time winner for the five-time world champions.

On the pitch Friday, hosts Chile, rocked by the arrest for drunk-driving of star midfielder Vidal earlier in the week, turned on the style to ensure qualification for the quarter-finals as group winners with a 5-0 demolition job of Bolivia.

Both Chile and Bolivia had already been assured of a place in the last eight after Ecuador’s 2-1 victory over Mexico earlier in the day.

Goals from Charles Aranguiz (2), Alexis Sanchez, Gary Medel and an own goal from Bolivia captain Ronald Raldes completed a one-sided rout for the hosts, who now face a quarter-final in Santiago next Wednesday against the best ranked third placed team from the first phase, most likely to be either Uruguay or Paraguay.

The Chileans, who included Vidal in their starting line-up, swept into an early lead after only three minutes with a well-worked goal from Aranguiz.

Inter Milan defender Medel pumped a long ball forward, and Eduardo Vargas knocked down it into the path of Aranguiz, who drilled a low shot beyond Bolivia goalkeeper Romel Quinonez.

English Premier League star Sanchez made it 2-0 with a superb low header on 37 minutes to leave Chile in control at half-time.

Aranguiz grabbed his second of the evening at 66 minutes, finishing off a low cross from Angelo Henriquez.

Medel made it 4-0 with a superb individual effort in the 80th minute, playing a one-two with Jorge Valdivia, controlling on his chest and then lifting a chipped finish over Quinonez.

Bolivia’s misery was complete when skipper Raldes chipped his goalkeeper for a freak own goal to make it 5-0.