Home World A year on, no quick fix to halt IS 'caliphate' 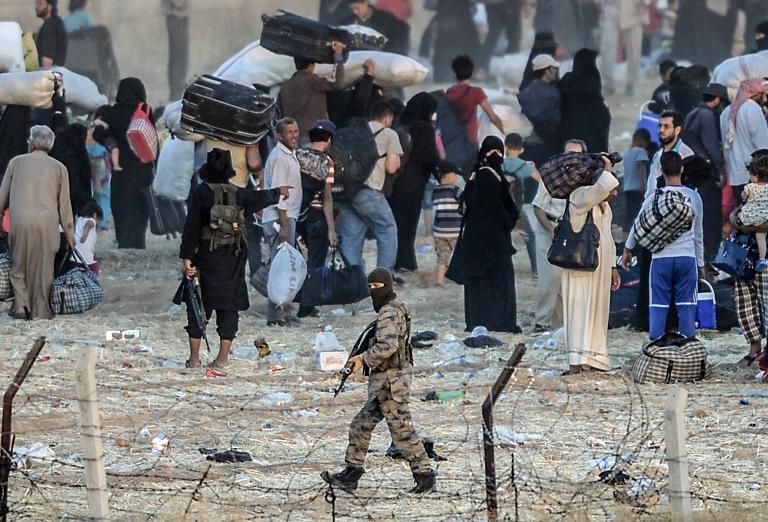 A year after its establishment, the Islamic State group’s self-declared “caliphate” in Syria and Iraq remains well-funded and heavily armed, and experts say it could be around for years to come.

The would-be state headed by IS chief Abu Bakr al-Baghdadi — called Caliph Ibrahim by his followers — has suffered setbacks in the months since it was proclaimed.

A US-led coalition is carrying out strikes against the group throughout its territory and this week it lost the key Syrian border town of Tal Abyad to Kurdish forces.

But the group has continued to score shocking victories elsewhere, including the seizure of Syria’s ancient city of Palmyra, and experts say IS and its “caliphate” have the means to last for years.

“The group operates as an insurgency and might shrink in one region and expand in another, but it’ll stay with us for the foreseeable future,” said Hassan Hassan, associate fellow at the Chatham House think tank’s Middle East and North Africa programme.

“I see it existing and active for at least a decade.”

Other experts agree that while the current borders of the caliphate are likely to shift, the entity is far from on its last legs.

“The very idea of the caliphate and ‘Caliph Ibrahim’ will surely remain for many of the movement’s members and supporters around the world,” said Charles Lister, a vising fellow at the Brookings Doha Center think thank.

IS’s success is driven by various factors, chief among them its significant financial resources, superior firepower, and ability to play on the legitimate grievances of local populations in Syria and Iraq.

“It remains the richest terrorist group in the world,” with weekly revenues of about $2 million (1.7 million euros), said Patrick Johnston, a political scientist at the Rand Corporation think tank.

US-led strikes on the group’s oil infrastructure and a drop in the price of crude have cut into its funds, but it has found ways to compensate.

“Key among them are extortion, taxation, and the sale of looted goods from areas they have captured,” Johnston said.

More importantly, the group’s operating costs are relatively low: it has a steady supply of recruits, particularly foreign fighters, and its vast armoury is stocked largely from the spoils of battles against armies and other rebel groups.

Fighters have access to a range of small arms and light weapons, as well as artillery, anti-tank guns and a “seemingly unending supply of pick-up trucks and captured armoured vehicles and, in Syria, tanks,” according to Lister.

He said the group seeks to “ensure a near-constant series of tactical-level victories are won, thereby resulting in the capture of additional weapons supplies.”

IS also buys arms from the black market, making it “one of the most equipped groups in Syria and Iraq,” said Hassan, author of a book on the group.

“IS has the weapons, training and means to operate as a small army,” he said.

– A lack of alternatives –

The US-led coalition fighting IS has had some successes, but experts say it is constrained by a lack of reliable ground forces and relatively poor intelligence.

IS meanwhile has strategically focused its expansion on areas where local government and security is weak.

And it quickly implements governance in captured territory, Johnston said, using its bureaucrats and police to consolidate its control.

The jihadists use a carrot-and-stick approach with local populations, terrorising with brutal public executions but also offering relative stability and public services including healthcare and education.

“Its popularity is fluid… but generally it still has what it takes to rule without much pressure from within its areas,” said Hassan.

“People on the ground still fear the group’s retribution, see value in its model of governance, and don’t have any other acceptable alternatives.”

The lack of alternatives has been key to IS’s success in Syria and Iraq, where Sunni Muslims feel excluded from the ruling class.

In Syria, Sunnis have led the uprising against President Bashar al-Assad, who hails from the Alawite offshoot of Shiite Islam.

In Iraq, they frequently accuse the Shiite-led government of discrimination.

Those dynamics mean a purely military approach to the “caliphate problem” will fall short.

“So long as Assad remains in Syria and so long as Baghdad’s improvements in representative government do not translate into a shift in perceptions on the ground, IS will always retain a chance of acquiring people’s tacit acceptance,” Lister said.

“Ultimately the only genuine solution to IS is to solve the underlying issues of societal division and political failure that IS has sought to exacerbate and exploit to its advantage.”