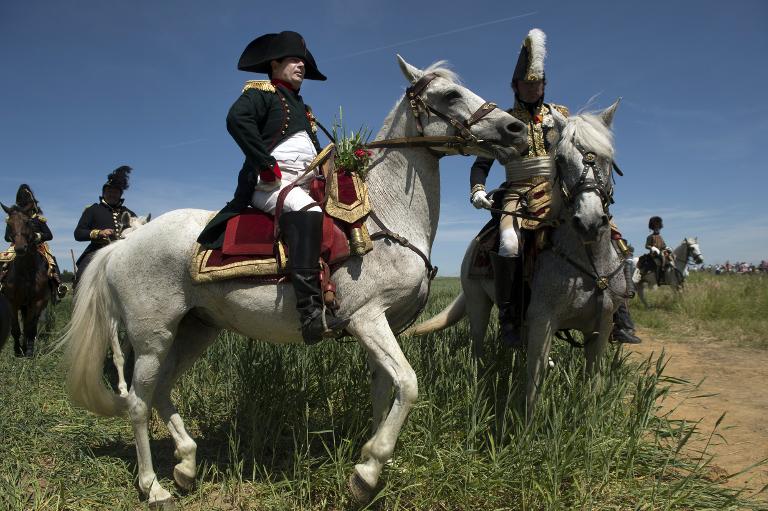 European royals and diplomats gathered in Belgium Thursday to mark the 200th anniversary of the Battle of Waterloo, a turning point for the continent which still touches a nerve and stirs national passions.

“Waterloo, the folly and the grandeur. The horror and the genius. The tragedy and then the hope,” Belgian Prime Minister Charles Michel said in an opening address under leaden skies.

The stress was on modern-day reconciliation and the sacrifice of some 47,000 dead or wounded soldiers on the fields around the small drab town just south of Brussels, the target of Napoleon’s ill-fated drive north in June 1815.

France and Germany however sent only their ambassadors to a ceremony that attracted kings and dukes, stirring a history that runs deep in a corner of the continent scarred by centuries of war.

Just as two centuries ago when the French emperor faced off against allied forces, it rained overnight and the skies were overcast again for the ceremonies, carried live on Belgian television.

Michel called for reconciliation through the “European project” and its promise of peace despite modern-day challenges of conflict on its borders in Ukraine and economic worries.

“The enemies of yesterday are the allies of today,” he said. “This reality, it is the European project.”

The battle was a pivotal moment in European history, as some 93,000 French troops led by Napoleon fought 125,000 British, German and Belgian-Dutch forces under the Duke of Wellington and Field Marshal Bluecher.

Defeat saw Napoleon exiled to Saint Helena in the south Atlantic Ocean, where he died in 1821.

The victors then redrew the map of a Europe which enjoyed almost a century of relative peace until the carnage of World War I.

Thursday’s solemn ceremonies in Belgium began at 11:00 am (0900 GMT), the moment the first musket balls flew.

In Britain, the heir to the throne Prince Charles attended a service at St Paul’s Cathedral in London in full military regalia as a field marshal, accompanied by his wife Camilla.

“The battle changed history. Had we not won, we would probably be speaking French now.”

On Wednesday, Charles unveiled a memorial at the Hougoumont Farmhouse, where allied forces fought off repeated French attacks as Napoleon desperately sought to break their lines.

Just nearby stands the Waterloo monument, a massive mound topped by a defiant lion looking south which was completed in 1826 when Belgium was part of Holland and is said to be a warning to France never to come this way again.

French Prime Minister Manuel Valls was ambiguous at best about the ceremonies.

“I heard it said this morning that President (Francois Hollande) and myself should have been there so that we could shed our tears over this fearsome moment for our country,” Valls said.

Hollande was to mark the June 18, 1940 rallying call issued by General de Gaulle over the BBC for resistance against German forces in France.

For France, that June 18 date is a badge of honour when the country found its nerve again after a crushing defeat and dared to challenge the Nazi invader.

As for Napoleon, French Defence Minister Jean-Yves Le Drian appeared to sum up the dilemma — he had many great achievements but also “certain failures, this drive for power and extending borders which was not right.”

A total of 200,000 spectators are expected to make their way to Waterloo, starting with Thursday’s commemorative service and ending with battle re-enactments on Friday and Saturday.

Belgium’s King Philippe led the attendance, which included the Grand-Duke of Luxembourg and the Duke of Kent, the cousin of Britain’s Queen Elizabeth II, along with Frans Timmermans, the first vice-president of the European Commission.

The absence of Hollande and German Chancellor Angela Merkel was cause for regret.

Among those proudly present were descendants of the top commanders on the day — Dutch King Willem-Alexander, whose ancestor the Prince of Orange was wounded at Waterloo; Prince Jean-Christophe Napoleon Bonaparte; Arthur Wellesley, the son of the current Duke of Wellington and Prince Nikolaus Bluecher von Wahlstatt, whose illustrous forerunner led the Prussians who arrived just in time to save the day for the allied forces.

The four men placed ribbons of orange, red, black and blue to recall the army standards flown, under a cannon ball and then joined hands in a gesture of reconciliation.