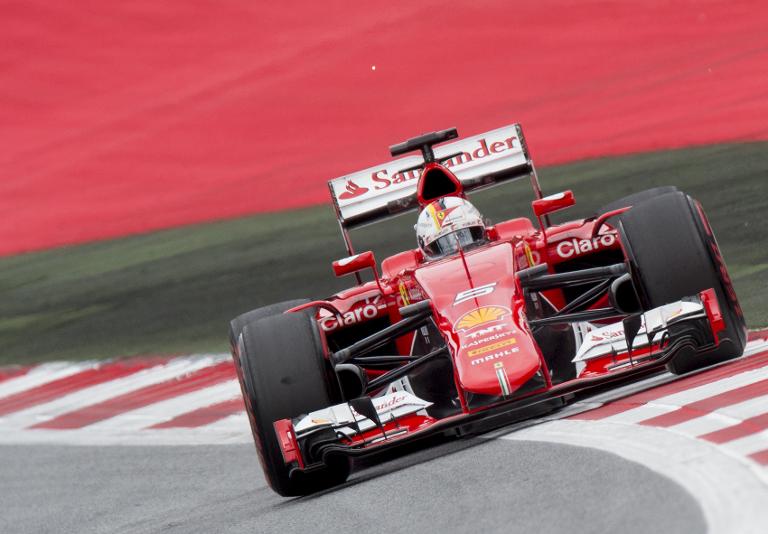 Ferrari team chief Maurizio Arrivabene did not know if he should laugh or cry on Friday when he escaped unscathed from a near-miss in the pit lane, and then saw Sebastian Vettel top the times in second practice at the Austrian Grand Prix.

On an incident-filled day, the four-time champion had been slowest and last in the morning due to gearbox problems, but bounced back in the afternoon with the fastest lap, before stopping again.

Arrivabene, regarded as one of the paddock’s coolest characters, could only shrug. It had been one of those days for him, Ferrari and Vettel.

The German’s lap was enough for him to wind up 0.011 seconds quicker than nearest rival Nico Rosberg of Mercedes on a cool, cloudy and unpredictable afternoon at the Red Bull Ring as Ferrari upstaged their rivals, Kimi Raikkonen clocking the third-best time in the second Ferrari.

Rosberg, who won last year’s race to stimulate a mid-season surge of good form, conceded that Ferrari’s speed was a threat to champions Mercedes’ continued supremacy.

“We are always worried about them as they are our closest rival,” said Rosberg. “But here on this track, it is a very short lap time so everyone is going to be closer. They seem quick. Very close, too.”

Vettel was quick to play down any hopes of glory for Ferrari, saying: “It is too early to say anything and I don’t think we have closed the gap so much, but let’s see.

“It is always difficult to say. Usually, they are always able to make a step overnight, but hopefully we can stick with them and put pressure on them tomorrow.”

Vettel said his gearbox problems were not related.

“We had an issue with the gearbox this afternoon, some of the sensors switched into alert mode and we slowed down.

“We will have a close look. We don’t know yet what’s the problem, but it seems unrelated from this morning.

“This is a circuit where it’s important to have a rhythm and it helps the more laps you do. Unfortunately we couldn’t do as many as we wanted.”

Few drivers found a rhythm with most finding it difficult to ‘warm up’ their tyres in the cool temperatures in the Styrian Alps and Hamilton delivered an untypical series of ragged laps.

“It has been okay,” he said with a grin. “Not the best of days, but the car has been great. It’s just the track — there is not a lot of grip here.”

Arrivabene was fortunate that he found enough grip to avoid an accident after stepping in front of an oncoming car â€“- without turning to look â€“- during the opening session.

Luckily, for him, his friend Felipe Massa saw him and swiftly hit the brakes on his Williams, stopping just a metre from the bearded Italian as he strode into the road. A rueful grin and a thumbs up followed.

“It was pretty close,” said the Brazilian.