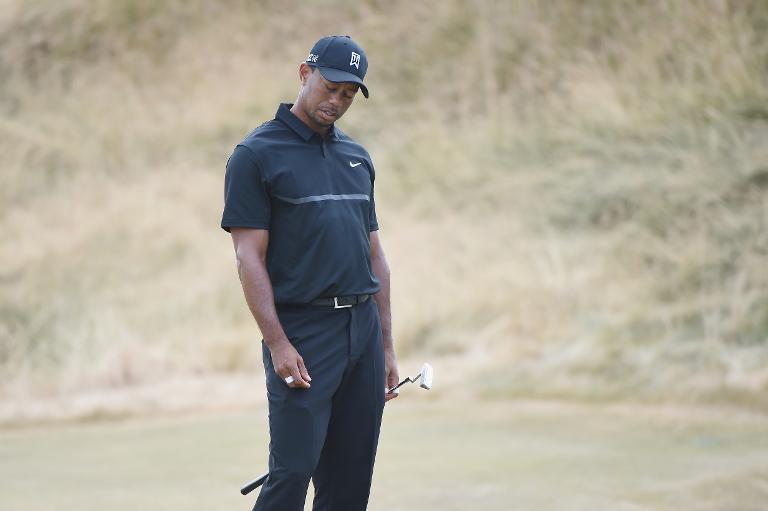 Tiger Woods endured the worst US Open round of his career Thursday with a shocking 10-over 80 at Chambers Bay.

It marked Woods’ third round in the 80s this season and he equalled the worst major championship round of his career, bringing back memories of his 10-over 81 at the storm-hit 2002 British Open in Muirfield.

“Not very happy, that’s for sure. It was a tough day,” said Woods, who will turn 40 in December. “I couldn’t quite get it turned around today.”

Woods’ head-scratching opening round comes just two weeks after he shot a career-high 85 in the third round of The Memorial.

His previous worst score in a US Open was in 2006 at Winged Foot in Mamaroneck, New York, where he shot two straight rounds of 76 and missed the cut.

“For some reason I just can’t get the consistency that I’d like to have out there,” said Woods, who finished with eight bogeys, one triple bogey and just one birdie.

The 10-over comes 15 years to the day that Woods won his first US Open title by 15 strokes at Pebble Beach.

Now the 14-time major winner will need a miracle to make the cut on Friday as he finished ahead of just two other players at Chambers Bay and one of those was his playing partner and reigning Players Championship winner Rickie Fowler who shot an 11-over 81.

Woods started his round Thursday with back-to-back bogeys on the front nine as his season-long slump is showing no signs of ending soon despite a series of swing changes he implemented in the hope it would straighten out his game.

On the back nine he had three straight bogeys beginning at No. 11, followed by a triple bogey on the par-four 14th.

He capped his round with another bogey at the par-five 18 after topping his approach so deep into one bunker that he had to go down a set of stairs to find it.

Woods was even outscored Thursday by 15-year-old amateur Cole Hammer who beat him by three strokes with a 77.

The only other player to finish worse than Woods and Fowler was Rich Berberian who had a 13-over 83.

“The bright side is at least I kicked Rickie’s butt today,” said Woods, trying to find some humour in the situation.

Woods said he fought through it as best he could but just came up empty.

“I couldn’t grind out any harder than that. Unfortunately it was a high number today,” he said.

Woods said undergoing knee surgery is one thing but there is nothing like trying to recover from his back surgery.

“Knee surgeries are pretty easy compared to a back surgery, the recovery time,” he said.

“And for some reason, it’s just a lot harder dealing with a nerve than a joint.”

Despite his troubles, Woods isn’t about to give up. Asked how he plans to turn this around, he said, “Keep working. Keep grinding, and keep working.”

The quirky links-style Chambers Bay course is one of the longest in US Open history with an array of elevation changes that only adds to the mental and physical demands on the golfers.

The stretch from the fourth hole to the seventh is one of the most difficult par-four series the players are going to see all season.

So with the state of Woods’ game at the moment he was lucky to get through that section in two-over par.

But just when he thought the worst might be over he reached the 602-yard, par-five eighth.

Woods’ wayward tee shot sailed well right into the deep fescue grass, coming to rest on a steep bank and giving him an awkward downslope stance.

Woods paced the area and then took a time out to tie his shoes while he pondered the difficult lie.

He stood over the ball and took a full swing, making contact but also hitting something hard on the ground which caused him to fling his club about 30 feet backwards over his left shoulder.

Woods turned around picked up the club and checked the shaft to make sure it wasn’t broken or warped.

But what he couldn’t see was that his ball had travelled to the other side of the fairway where it had stopped in more rough.

Despite his troubles, Woods reached the green on eight with his third shot, giving him a birdie chance from 20 feet. But his first putt landed short and he tapped in for par.

“When I do it right, it’s so easy. It just feels easy to control, easy to do it, easy to hit all my shots. I just need to do it more often,” he said.