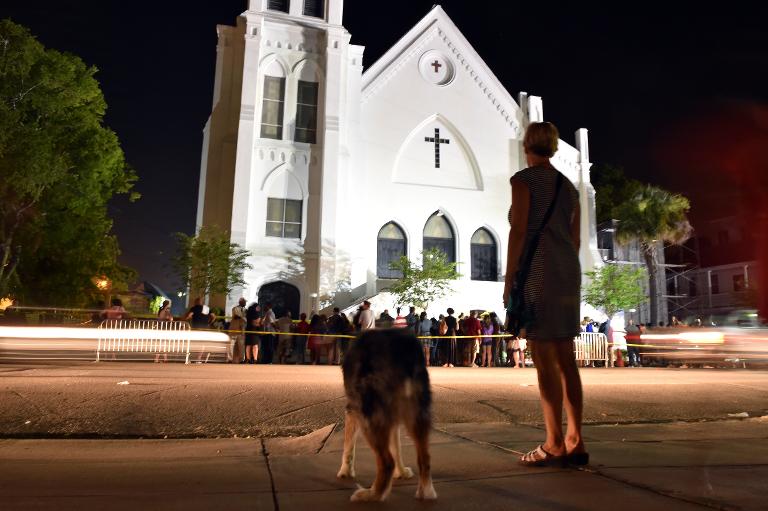 US police arrested a white high school dropout Thursday suspected of carrying out a gun massacre at one of America’s oldest black churches, the latest deadly assault to fuel simmering racial tensions.

He was caught at a traffic stop in North Carolina and flown back just hours later to Charleston, South Carolina, the scene of the slaughter in the Emanuel African Methodist Episcopal Church.

The carnage was the worst at a US place of worship in decades and recalled the darkest periods of US history, in a church once burned to the ground after a failed slave revolt.

Charleston Police Chief Gregory Mullen said: “I do believe it was a hate crime.”

A reported friend of the accused, 21-year-old Dalton Tyler, told ABC News that Roof had spoken in support of racial segregation and had “said he wanted to start a civil war.”

US media reported that Roof had been arrested in recent months on charges related to drugs and trespassing at a mall.

In Washington, a clearly frustrated President Barack Obama said the “senseless murders” showed the United States will have to come to grips with its gun culture.

“At some point, we as a country will have to reckon with the fact that this type of mass violence does not happen in other advanced countries,” Obama said.

Members of the historic church’s mainly black congregation, many of them elderly, had gathered Wednesday for a Bible study meeting when the shooter walked into the building, sat for about an hour, then opened fire.

Sylvia Johnson, a relative of one of the victims, told CNN a survivor had told her that the gunman had made a racist rant during the attack.

Johnson said one of the victims tried to talk the shooter out of more killings after he opened fire.

“He said ‘No, you’ve raped our women and you’re taking over the country. I have to do what I have to do,'” she told CNN.

Johnson also said the shooter told the victims he left survivors so they could tell the story of the shooting.

Three men and six women were killed, and more people were wounded. Among the dead was the church’s pastor, 41-year-old Clementa Pinckney, who also was a Democratic state senator known to Obama.

The shooting came at a time of heightened tension in America after several high-profile killings of unarmed black men at the hands of white police triggered protests and a national debate on race.

A picture on Roof’s Facebook page showed him wearing a jacket emblazoned with the flags of apartheid-era South Africa and former white minority-ruled Rhodesia, now Zimbabwe.

He is also pictured with a car with a license plate referring to the “Confederate States of America,” the secessionist slave-owning south defeated in the US Civil War.

The Atlantic coast city of Charleston is known locally as “The Holy City,” due to its large number of churches, many of them community anchors for a diverse range of ethnic groups.

The scene in the picturesque city as a traumatic 24 hours drew to a close was one of stunned grief, rather than rage, while a small demonstration took place in New York, where some protesters wept at the loss of life.

Dot Scott of the local chapter of the National Association for the Advancement of Colored People said the shooter may not have drawn attention because the church is a tourist draw.

“It’s not out of the ordinary that folks just walk into the sanctuary and sit and listen to what’s going on,” Scott told CNN.

The handsome Emanuel African Methodist Episcopal Church — which on Thursday became the focal point for a grieving community — is the oldest such church in America’s southern states.

It was founded in 1816 and in 1822 was investigated for its involvement with an unsuccessful planned slave revolt.

The shooting is the latest in a long list of mass shootings in the United States.

The deadliest in recent years include the April 2007 Virginia Tech shooting, when 32 were killed, and the December 2012 Sandy Hook elementary school shootings in Newtown, Connecticut, when a total of 27 people were killed, including 20 children.

In August 2012, six people were shot dead at a Sikh temple in Wisconsin by a neo-Nazi.