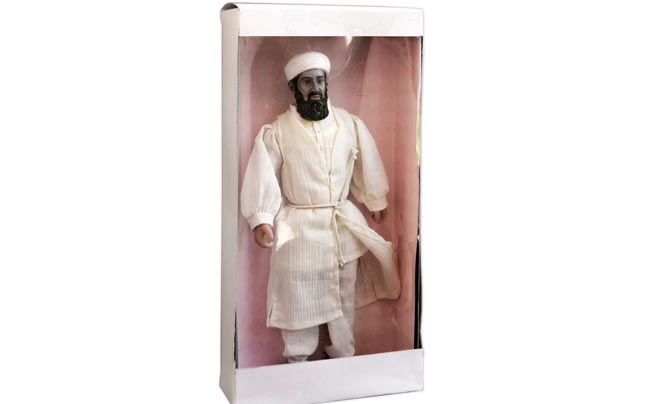 A demon-facedÂ Osama bin LadenÂ doll that was created as part of a CIA programme to dissuade children from idolising the al-Qaeda chief has been put on sale.Â Only three copies of the 12-inch figurine are know to exist as the CIA ditched the secret programme called ‘Devil Eyes’ which aimed to turn children away from the terror leader.

CIA officials had approached Levine about the possibility of producing the bin Laden figures and having them sent to Pakistan or Afghanistan. Levine was initially ambivalent about the project but later reportedly threw himself into the work.

One of the prototypes is believed to be in the CIA’s possession, while the other two were kept by the Levine family.

Last November one of the dolls owned by the Levine family was sold for US $11,875 at auction to an anonymous buyer in the US.Â Now Levine’s son is selling the family’s second doll through memorabilia auctioneers Nate D Sanders in Los Angeles with a starting bid of US $5,000.

The auction house describes the doll as “designed for the CIA by Donald Levine in 2005 for an ‘influence operation’, intended to strategically distribute a scary depiction of Bin Laden to children, ideally to dissuade them from joining a terrorist group such as al-Qaeda.”

The doll wears traditional Islamic garb, a white removable five button robe over a four button white tunic with a mock collar, with off-white cloth pants and a pair of black mock velcro boots. The doll is housed on metal stand inside, with a clasp to the doll’s midsection allowing the doll to be displayed standing up.

Bin Laden was killed in the garrison town of Abbottabad on May 2, 2011, in a covert raid carried out by the US Navy SEALs.Â