Home Sports New York Yankees' A-Rod one hit away from 3,000 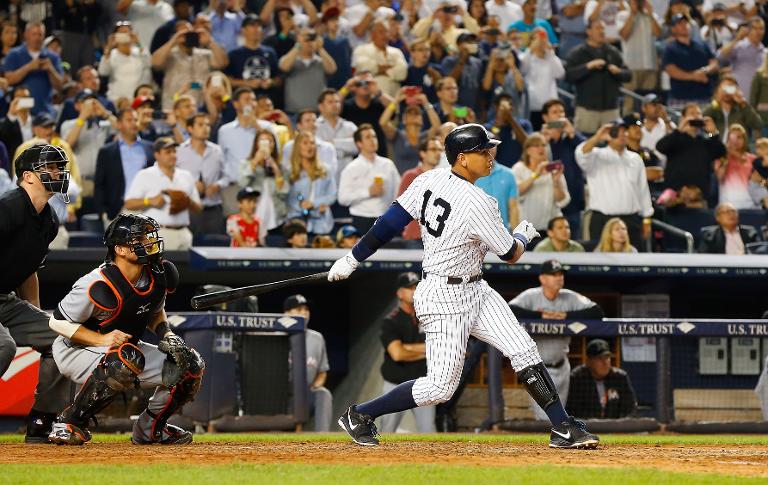 Rodriguez, who returned this season after serving a 162-game suspension for doping violations linked to the Biogenesis steroid distribution scandal, has been methodically ticking off milestones.

In Thursday’s 9-4 win over the Miami Marlins, Rodriguez notched an RBI single in the first inning and another in the fifth to take his career hits tally to 2,999.

He had two more chances to reach 3,000 but lined out hard to right field in the sixth inning and walked on four pitches, all inside, in the eighth.

The walk by Marlins pitcher Sam Dyson provoked jeers from 38,239 fans, who stood and cheered during Rodriguez’s final two at-bats.

He’ll have another chance to reach 3,000 on Friday when the Yankees continue an eight-game homestand with the first of three games against Detroit.

Since his return, Rodriguez has been gradually winning over Yankees fans, but he remains a controversial figure.

He and the Yankees remain at odds over a $6 million bonus payment that Rodriguez believes he is owed for tying Mays on the home run list.

The Yankees have suggested that he shouldn’t get the bonus because his drug-tainted past means the achievement isn’t marketable, although both parties have reportedly agreed to set aside that dispute for the time being — with Major League Baseball agreeing to waive a 45-day deadline for Rodriguez to file a grievance.

With Rodriguez closing in on 3,000 hits, Yankees manager Joe Girardi said that even his designated hitter’s shadowed past couldn’t erase the magnitude of the achievement.

“I find it very impressive that anyone can get to 3,000 hits, no matter what the circumstances are,” Girardi said before the game.

He thought the likelihood of Rodriguez reaching the mark in Yankee Stadium was a bonus.

“I think it’ll mean a lot,” Girardi said. “And I think Alex is appreciative for the way the fans have treated him at home. I see him going out of his way to do things, and I think that’s nice.”

The kind of things Girardi spoke of included Rodriguez’s appearance earlier on Thursday in a park built where the old Yankee Stadium stood.

He was a surprise guest in an event that was part of Major League Baseball’s “Play Ball” program aimed at fostering participation in the game.

“There’s not much about 2015 I would have believed,” Rodriguez said. “It’s really been an incredible season.

“The team’s playing well, my team-mates have welcomed me back. I’m really flattered and humbled to be in this position.”