Home Sports Messi's 100 games of tears but no titles 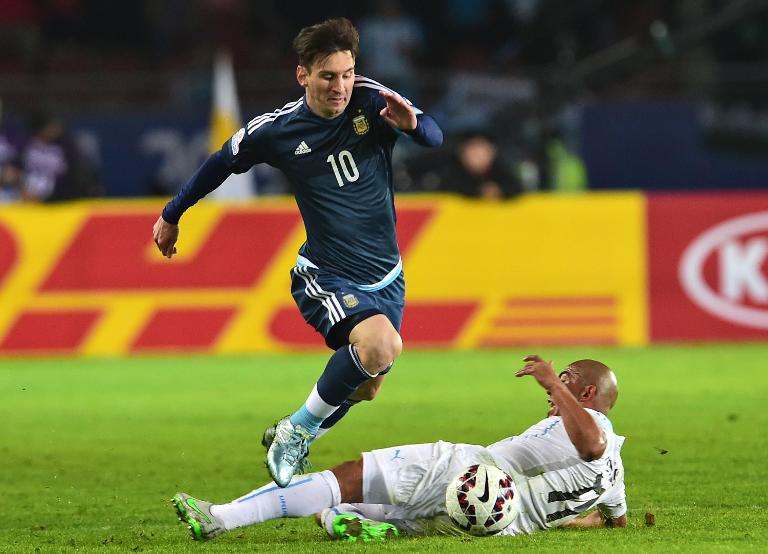 Lionel Messi will play his 100th match for Argentina on Saturday against Jamaica in the Copa America but it will be a century marked by too many tears and no titles.

Silverware envy has followed the little genius wherever he goes at the tournament in Chile where he will also celebrate his 28th birthday next week.

“I’m very happy to reach this record. Hopefully I can celebrate another victory and once and for all lift a cup,” the Barcelona striker said in an interview published on Thursday by Argentinian daily La Nacion.

Messi, Sergio Aguero, Carlos Tevez and the rest of the Argentina squad have been sent across the Andes on a mission to end 22 years without a major title since the country won the Copa America in 1993.

His extraordinary debut against Hungary on August 17, 2005 set the scene for an international career in total contrast to his success as a Barcelona player which has seen him win four world player of the year awards, four Champions League titles, seven Spanish league titles and three Copas del Rey.

The 18-year-old Messi came on as a second-half substitute against Hungary and a minute later was marching off again after getting a red card for elbowing opposing defender Vilmos Vanczak.

Team-mates went into the dressing room at the end and found Messi crying in a corner, Argetinian media reported at the time.

Since then, his 99 games for Argentina have produced 46 goals. It is an impressive return, but pales in comparison to his record of 412 goals in 482 games for Barcelona.

Nevertheless, Messi seems certain to eventually go on and beat Javer Zanetti’s record of 145 caps for Argentina and Gabriel Batistuta’s record of 56 goals.

Messi won the under-20 World Cup in 2005 and an Olympics football gold at the 2008 Beijing Games. He is now estimated to earn more than $70 million a year but there is no Copa America and no World Cup to his name.

Messi was in the Argentinian team beaten by Brazil in the 2007 Copa America final in Venezuela and by Uruguay in the quarter-finals of the 2011 tournament on home soil. In 12 games at the Copa he has scored just three goals.

There has been more heartbreak in the World Cup.

In 2006, he scored on his World Cup debut in a 6-0 demolition of Serbia and Montenegro. But Argentina were beaten by Germany on penalties in the quarter-finals.

In 2010, with Diego Maradona as coach, Argentina were among the favourites but lost again in the quarter-finals, again to Germany. There were more tears for Messi.

Last year, Messi scored four goals as Argentina pushed through to the World Cup final in Rio de Janeiro’s Marcana Stadium. But with one foot in the gates of glory, Messi saw Mario Goetze score a 113th-minute winner and Germany again ruined his day.

Messi knows that he can be the most brilliant player, waltz around countless defenders, but he will not overtake Maradona as the legend of the Argentinian game until he get his hand on a trophy with his country.

The 99 games for Argentina have been “an amazing experience” but “unfortunately without a title,” he said.