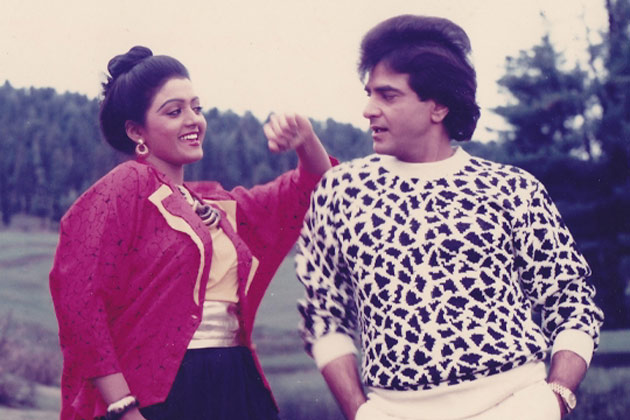 Bollywood yesteryear actor and dancing legend Jeetendra who is popularly known as â€˜Jumping Jackâ€™ is a man full of talents. For those of you who havenâ€™t seen him dish out some of his famous moves, hereâ€™s your chance.

Jeetuji will be on the dance show Nach Baliye, shaking a leg with his daughter Ekta Kapoor, who is the producer of Nach Baliye. This is for the first time the father and daughter will be seen dancing together on the pre-finale of Nach Baliye as Ekta wanted his father to mentor and support the celebrity couples during the last level of the dance based show.

Think of Jeetendra and the very first thing strikes your mind is of a handsome, energetic man in white suit with gleaming white boots all ready to groove at the slightest pretext.

NewsMobile has brought some of his best dance moves, handpicked for you!

Chadhti Jawani — This song is from the movie Caravan, which was released in 1971. When you talk about catchy numbers where there were songs like Piya tu ab toh aaja and Daiyya main yeh kahan aa fassi, you will definitely like this song where we can see Aruna Irani and Asha Parekh sharing screen space with our very favourite Jeetendra.

Dhal gaya din — This song is from the movie Humjoli which was released in 1970. This song showcased Jeetendra and Leena Chandravarkar playing in a badminton court.

Aa meri humjoli aa — This song is from the movie Jeene Ki Raah, which was released in 1969. One of the best hide-n-seek songs ever â€“ itâ€™s such a cute song. The song had Tanuja and Jeetendra in the lead.

Naino mein sapna — This song is from the movie Himmatwala which was released in 1983. The song had Sridevi and Jeetendra in the lead and was really appreciated by all.