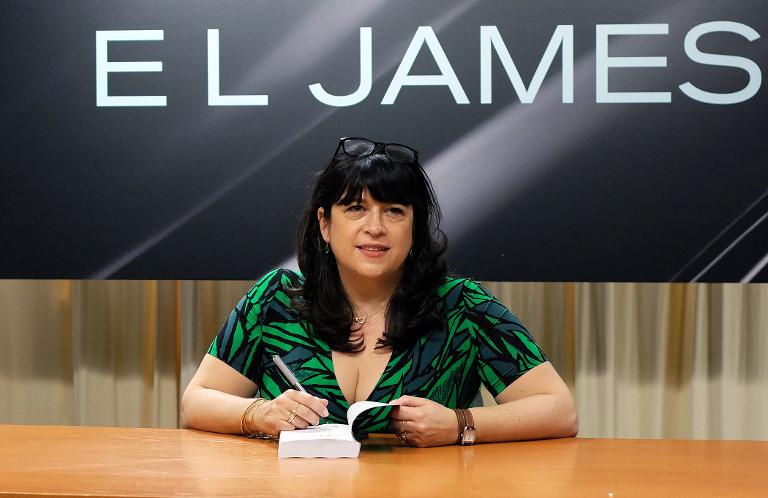 They camped out overnight, arrived in trains caught at dawn and devoured the first pages on the sidewalk.

High school girls, mothers with toddlers and buxom housewives queued down Fifth Avenue and round the block to get their hands on “Grey” and have it signed by unassuming British author, E.L. James.

Sisters Kimberly Caraballo, 20, and Kira Guadalupe, 19, said they were the first in line, spending the night on an uncomfortable metal bench, and dining on McDonald’s.

“We’re big fans,” Kimberly told AFP. Kira said their family thought they were “crazy people” and admitted it had been an uncomfortable night.

The college students said they couldn’t wait to read the novel, told this time from the perspective of bondage-king and billionaire Christian Grey, instead of his young, meek lover Anastasia Steele.

The 559-page paperback, “Grey: Fifty Shades of Grey as Told by Christian,” hit bookstores on her fictional character’s birthday, and could be pre-ordered and downloaded on Kindle at midnight.

Such was the frenzy surrounding the announcement of the book’s release, it was propelled to an Amazon best-seller.

Early reviews panned the book: “As arousing as the diary of a sex offender” wrote The Telegraph.

“I’m a creep,” headlined The Economist.

Die-hard fans, however, couldn’t care less about what critics thought.

Mother of four Amber Garrow parked her children with her mother, and took the first train from Connecticut at dawn to meet 52-year-old James in the flesh an astonishing fourth time.

“It’s fantasy,” she told AFP. “It takes me out of my own life. That’s what fiction’s for!”

She downloaded the ebook at midnight and Thursday read the first 40 pages of the hard copy, sitting in a fold-out chair outside Barnes and Noble, shielded from a faint summer drizzle.

“A lot of us have re-read it and re-read it, and you think he thinks something different every time. I love getting both sides and hearing about his rough side,” said Garrow.

Angela Cetrangola said “Fifty Shades” had transformed her into an avid reader, so hooked on the genre that she contributes to “Sizzling Pages” — a blog that reviews racy romance novels.

“It’s unlike anything I’ve read before,” she said, accompanied by her twin 15-year-old daughters, who she insists are too young to read the books.

James, a married mother of two from suburban London, dedicated the book to readers “who asked… and asked… and asked for this. Thank you for all that you’ve done for me. You rock my world every day.”

Wearing a tight-fitting green dress and black stilettos, a bespectacled James beamed and chatted to fans, as she autographed copies with a flourish of biro.

The runaway success of the novels has been credited with creating a new genre of adult literature, spicing up sex lives and fueling a boom in sales of bondage gear and sex toys.

High school pupil Aliyah Bargas, from Miami, said she had been reading “Fifty Shades” since she was 14.

“I feel like I’m meeting a celebrity,” she said. Calling herself an aspiring author who wants to work in publishing.

One 18-year-old man, drafted in as extra security to safeguard the event, said the hype convinced him to buy a copy, hoping it would become a valuable collector’s item over time.

“Grey is somebody who has mommy issues,” he said.

“It shows that Mr Perfect isn’t always perfect. He’s young, fit and rich, he’s a sight for sore eyes but (his flaws) make it relatable.”