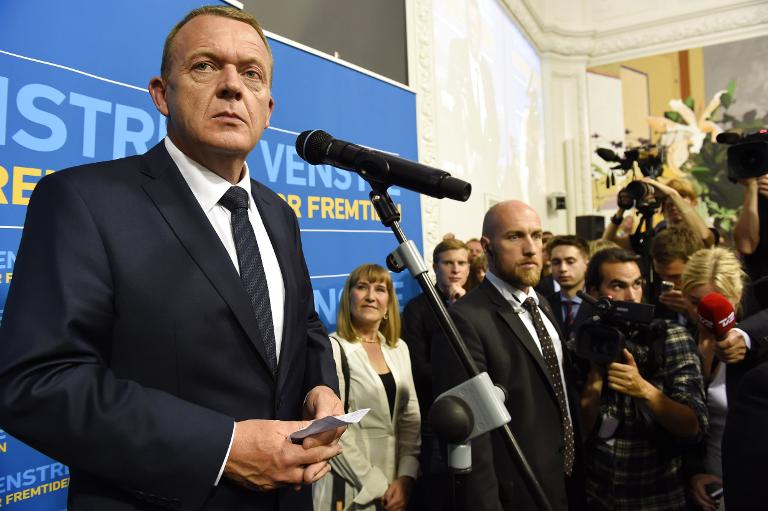 The anti-immigration Danish People’s Party (DPP) on Friday weighed up whether to join Denmark’s next government after posting a record election score that made it the largest member of the right-wing bloc.

Lars Lokke Rasmussen of the right-wing Venstre party is expected to head a new coalition government, but he will face tough negotiations with the DPP after its support rose to 21.1 percent of the vote, a sharp rise from 12.3 percent in the previous election.

The result made it Denmark’s second largest party — even bigger than Venstre — but whether it would actually join a coalition remained to be seen.

A string of minor but highly publicised spending scandals eroded support for Rasmussen, whose party — until now Denmark’s main opposition party — dropped to 19.5 percent, losing more than a quarter of their votes from the last election.

“Venstre did not get the election we dreamed of, but we got the opportunity to head a government that can harness the economic upswing and let it gain traction in all of Denmark,” he wrote on Facebook.

“That opportunity will be explored in the coming days. Difficult negotiations await.”

Prime Minister Helle Thorning-Schmidt tendered her resignation to Queen Margrethe at midday Friday without speaking to journalists as she left the Amalienborg Palace.

While Thorning-Schmidt’s Social Democrats won the most votes, the centre-left bloc did not retain enough seats to stay in power.

Rasmussen was expected to visit the queen later Friday to formally be tasked with forming the new government.

Throughout the campaign the DPP said it would only join a government if it would give them more influence than merely providing passive support in parliament for a right-wing administration.

From 2001 until 2011 it backed right-wing governments in return for support on its key issue, tighter migration policies.

Observers have speculated that the party, often accused of populism, could lose its anti-establishment appeal if it enters a coalition.

Morten Messerschmidt, a DPP member of the European parliament, said the choice came down to either “committing to a policy for the next four years and then be allowed to sit (there) and administer it”, or being in a position where a Rasmussen-led government would have to “ask us every time they want to do something.”

Getting the DPP into the fold is in Rasmussen’s best interest, said Roger Buch, head of research at the Danish School of Media and Journalism in Aarhus.

Otherwise he faces “having to go to ‘big brother DPP’ in front of rolling cameras every time something needs to be negotiated,” he told the Jyllands-Posten newspaper.

Peter Nedergaard, a political science professor at the University of Copenhagen, told AFP he thought the DPP’s newfound clout was unlikely to have a dramatic impact on Danish politics since most of its policies were “rather moderate”.

Another expert said ideological differences would pose challenges for a coalition including the DPP.

“If they can do it in the long run, that’s where the challenge lies,” Johannes Andersen, a political scientist at Aalborg University, told the Jyllands-Posten.

Kristian Thulesen Dahl, the DPP’s leader since 2012, is credited with broadening its appeal and is seen as less divisive than his outspoken predecessor, Pia Kjaersgaard.

Under 45-year-old Dahl, the DPP toned down some of its most inflammatory rhetoric on immigration and veered to the left on economic issues.

While Venstre wants to freeze public spending, the DPP wants to raise it, and it wants corporate taxes at a level higher than not only its right-wing allies but also the Social Democrats.

That, along with disagreements over Europe, means it sits uneasily with the other three business-friendly parties that make up Denmark’s right-wing bloc.

The election results were hailed as “excellent” by the eurosceptic, anti-immigration Finns Party which came second in Finland’s polls in April.

“The True Finns are not alone in the Nordic countries, let alone in Europe,” Finnish foreign minister and party leader Timo Soini wrote on his blog.

A spokesman for the anti-immigration Sweden Democrats said he was surprised the DPP wasn’t more keen to join a coalition government.

The Swedish party “wants to do the same thing in Sweden, with the difference that I would like to sit in government and influence” it, party secretary Richard Jomshof told Swedish Radio.