Home Sports Cook goes off the boil at European Games 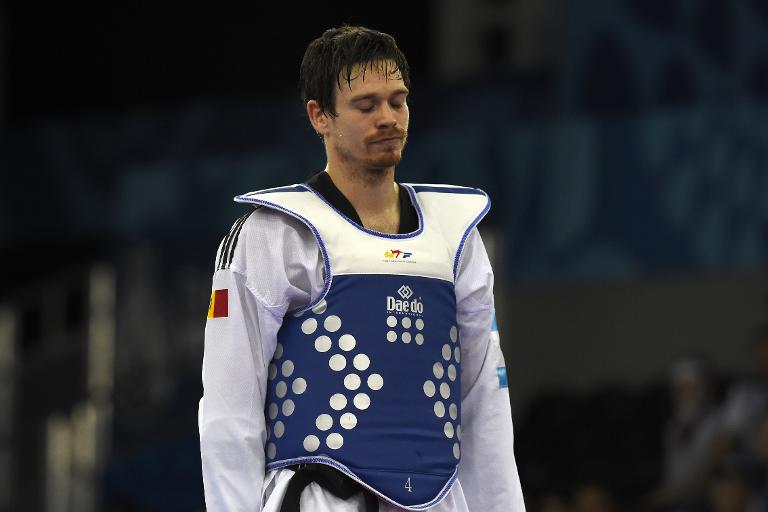 The sizeable amount of money paid by a Moldovan billionaire to persuade taekwondo world number two Aaron Cook to switch allegiance from Great Britain to Moldova failed to yield a gold medal at the European Games in Baku on Thursday.

The 24-year-old’s displeasure at being controversially omitted from the British team for the 2012 Olympics, despite then being world number one, led ultimately to his switch eased further by the undisclosed amount of money offered by Moldova’s billionaire taekwondo federation president Igor Iuzefovici.

Cook, a three-time European champion, though failed to show his customary brilliance on Thursday and went out in the quarter-finals on a golden point in sudden death to unheralded Portuguese Julio Ferreira.

Having fought back from 5-0 to level the bout at 7-7 in the final second of the combat Cook was distraught to then fail to clinch a place in the last four.

He muttered angrily to his coach and brother Luke and then slumped down and sat on the steps leading down from the mat.

“I am absolutely devastated, I was very disappointed after the world championships (in Russia in May) losing to Great Britain on golden point (in the semi-finals),” said Cook.

“It (European Games) was very close to the world championships and I just felt a little flat today, especially in that match.

“I came here for the gold medal every competition I expect the gold medal I put a lot of expectation on myself and that’s why I’m very disappointed,” added Cook, who didn’t take any pleasure from seeing Lutalo Muhammad who had been selected ahead of him for the Olympics also fail to reach the final in Baku.

Cook, whose girlfriend British world champion Bianca Walkden rubbed her hands nervously throughout the bout as she watched from the stands, said he would regroup and come back and try and qualify for the Olympics in Rio next year.

He added he had no regrets about his change of nationality.

“I feel it’s been easier in some ways, I can put the focus on my fights now and just focus on my training, and if I qualify I’m going to qualify and in Great Britain I possibly wouldn’t have had that chance,” said Cook.

Cook, who as a callow youth did compete for Britain in the 2008 Olympics losing in the bronze medal match, said he wasn’t prepared to stay in England nad experience the same crushing disappointment he had in 2012.

“I did everything possible to qualify for London, I was world number one and I won all the tournaments and fulfilled the criteria and it wasn’t good enough then so why would it have been good enough for Rio?” said Cook.

“I wasn’t going to put myself or my family through that again and that’s why we made the decision to go to Moldova.

“I’m just doing what’s best for me, realistically I’ve got six years left in my career, hopefully I’m going to have two shots left at an Olympic Games, and it’s given me the opportunity it wasn’t an easy decision of course but I think it was the right decision.”