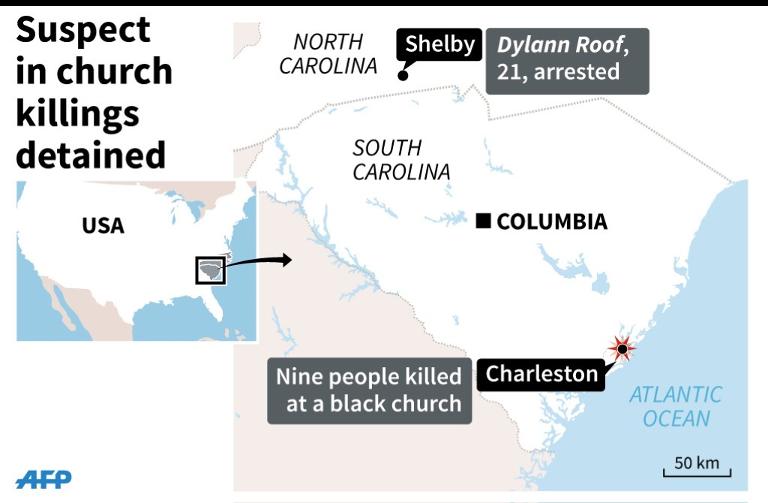 17:30 GMT – With the suspect in custody, we are closing our Live Report on the manhunt.

Today, prayer services are planned in Charleston to mark the tragedy as the city tries to come to terms with violence in a place of worship.

Authorities will be investigating the scene and the suspected shooter for months as the debate over who to blame and how to prevent the next attack rages. President Obama noted the difficulty in contolling gun and race-based violence in the United States, but said it must be done.

“At some point it’s going to be important for the American people to come to grips with it and for us to be able to shift how we think about the issue of gun violence collectively,” he said.

“The good news is I am confident that the outpouring of unity and strength and fellowship and love across Charleston today from all races, from all faiths, from all places of worship indicates the degree to which those old vestiges of hatred can be overcome.”

17:10 GMT – Where do you all go from here? – Darlene Green, 56, also African-American, has lived in Charleston off and on for 25 years. She tells AFP she learned about the shooting from a text message from her church, asking its members to pray for the victims.

â€œI was like overwhelmed, flustered, whatever. I can’t begin to wrap my mind around why that young man did thatâ€¦ Only him and God knows what happened.â€

Green added: â€œFrom what I understand, the young man just got the gun from his parents. I just want to know how his parents are accepting it — you got a child that took nine lives, where do you all go from here?â€

16:59 GMT – Locals react – AFP reporter Robert MacPherson hears from residents that they see this as a terrorist attack, particularly in light of the fact that the church’s pastor, also a lawmaker, tried to get the state to require background checks for gun purchases.

â€œSome look at this as race-race,â€ Jack Logan tells AFP, sweating profusely in the mid-day sun. â€œI look at this as this preacher being a state senator and his stance on guns and gun control. I look at this as a terrorist attack as well â€“ we worry about Iraq, Afghanistan and those (places), but we’ve got it right here in Americaâ€¦ We have it here in our own backyard, terrorism, and that is exactly what is going on.”

16:46 GMT – Bodies inside – AFPTV correspondent Loic Hofstedt is told by a police officer that an unspecified number of bodies remain in the church, more than 12 hours after the shooting. The main streets of Charleston have reopened, but the area around the church is sealed off with yellow crime scene tape.

A support center for victim’s families has been set up in a hotel a couple of blocks away. The media are corralled on a street corner nearby.

“On behalf of the whole House, let me say how shocked and heartbroken I am by the murder of innocent churchgoers in Charleston. At times like this, the depth of our grief reveals the depth of our love and our resolve, and our prayers go out to all the victims’ families. And our thoughts go to the law enforcement officers working to bring this perpetrator to justice. Anyone who would do something so unspeakable is pure evil.”

16:25 GMT – Guns – The president laments the gun violence that has long wracked the United States, insisting that something must be done to limit access to people who are intent on killing.

“Now is the time for mourning and for healing, but let’s be clear, at some point we, as a country, will have to reckon with the fact that this type of mass violence does not happen in other advanced countries. It doesn’t happen in other places with this kind of frequency. And it is in our power to do something about it.”

16:22 GMT – Obama – “This morning I spoke with, and Vice President Biden spoke with, Mayor Joe Riley and other leaders of Charleston to express our deep sorrow over the senseless murders that took place last night,” the president says in a statement to reporters carried live on TV.

“There is something particularly heartbreaking about a death happening in a place in which we seek solace and we seek peace, in a place of worship.”

16:19 GMT – Amazing Grace – Hundreds of people gather outside the church in Charleston to pray together. They begin to sing the spiritual “Amazing Grace.”

16:17 GMT – 14th time? – Veteran CBS White House correspondent tweets that by his count, Obama’s statement will be at least the 14th time “he has made a statement on a shooting attack.”

16:08 GMT – Alone – Mullen said Roof was stopped because someone was suspcious of his car. “He was cooperative with the officer who stopped him â€¦ I believe he acted alone. We don’t have any reason to believe there was anyone else involved.”

15:56 GMT – Safe at church? – Governor Haley vows to support the community as it struggles with such a tragedy.

“Parents are having to explain to their kids how they can go to church and feel safe, and that’s not something we thought we would ever deal with. Having said that, we are a strong and faithful state. We love our state. We love our country. Most importantly, we love each other.

15:52 GMT – Heart and Soul – A tearful Governor Nikki Haley wipes away a tear as she says, “the heart and soul of South Carolina was broken.”

15:44 GMT – Traffic stop – Charleston Police chief Gregory Mullen tells reporters that Roof was arrested after 11:00 am when authorities pulled over his car in North Carolina.

“I am very, very pleased to announce that we have made an arrest in this case,” he says. “Approximately 30 minutes ago he was arrested in Shelby, North Carolina, during a traffic stop.”

15:38 GMT – Investigation – Lynch is the one who would oversee the federal investigation into the crime now that it has been designated a hate crime.

“No, we’re not going to be discussing details of the investigation at this time. Certainly, now that we have someone in custody, we will be conducting a full and thorough investigation rising out of that circumstance building on the cooperative work that we have with our state and local partners in South Carolina.”

The US defines a hate crime as a â€œcriminal offense against a person or property motivated in whole or in part by an offender’s bias against a race, religion, disability, ethnic origin or sexual orientation.â€

15:33 GMT – Police – We are waiting for a press conference from Charleston police that had been expected at 11:30 (1530 GMT) but may have been delayed by reports of the capture.

15:25 GMT – Hours away – US media is reporting that the suspect, named by police earlier as Dylann Storm Roof, was caught in the town of Shelby, North Carolina, about 250 miles (400 km) away.

15:24 GMT – Confirmation – US Attorney General Loretta Lynch confirms that the suspect has been captured.

15:16 GMT – WELCOME to AFP’s Live Report on the manhunt for a young man believed to have killed nine people at a historically black church in Charleston, South Carolina.

So far, we know police were hunting for 21-year-old white gunman who is believed to have opened fire at a prayer meeting in one of the nation’s oldest black churches, sparking a federal hate crimes probe.

The shooting at the Emanuel African Methodist Episcopal Church in the southeastern US city was one of the worst attacks on a place of worship in the country in recent years, and comes at a time of lingering racial tensions.