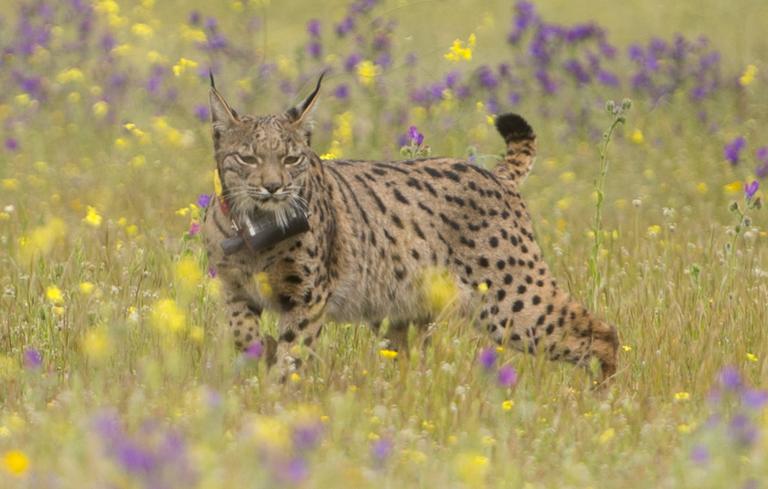 The world’s most endangered feline species, the Iberian lynx, is making a comeback in Spain after being pushed to the brink of extinction.

But the costly efforts to reintroduce the spotted cat into the wild face an unexpected enemy — cars.

The number of lynx killed by collisions with vehicles has soared since Spain’s economic crisis began in 2008.

Last year a record 22 lynxes died after being hit by cars, up from just two in 2008.

Cars are “the greatest threat for the future of the lynx”, according to the WWF, the World Wide Fund for Nature.

“It’s revolting because it’s a problem that could easily be fixed,” said Ramon Perez de Ayala, species program director at the WWF in Spain.

He estimates it would cost around six million euros ($6.5 million) to make roads safer for lynxes by clearing roadsides of brush, putting up barriers and setting up passages that allow the felines to safely cross roads.

“With the excuse of the economic crisis, we have not even carried out the most basic road maintenance works,” said Perez de Ayala.

The public works ministry said it “cooperates in the fight” against road accidents involving lynxes and has carried out needed road works.

The rise in lynx road deaths comes as efforts to boost lynx numbers through breeding programmes are starting to pay off.

Slightly larger than a red fox and distinguished by its black ear tufts, the lynx has seen its population ravaged by farming, poaching and a decline in wild rabbits, its main prey, due to disease.

Lynx numbers dropped from 100,000 at the beginning of the 20th century to less than 100 in 2002, leading the International Union for Conservation of Nature to list the animal as “critically endangered”.

“The Iberian lynx is the only feline classified in the highest category of risk of extinction,” said Catherine Numa of the Spanish branch of the Geneva-based body.

The WWF has warned that the Iberian lynx, found only in Spain and Portugal, could become the first big cat to go extinct since the sabre-tooth tiger died out 10,000 years ago.

In the hills of Toledo in central Spain a convoy of all-terrain vehicles bumped along a rural road lined by oak trees in April.

After passing a pack of fighting bulls, the convoy stops before a flower meadow near the town of Mazarambroz and Queen Sofia emerges surrounded by local politicians and security guards.

But the centre of attention is Lava and Lila, two one-year-old female Iberian lynxes weighing around 11 kilos (24 pounds) each, who are kept in separate cages covered by blankets.

As reporters snapped pictures, the royal approached one of the cages and released a lynx.

The animal hesitated briefly before darting towards a nearby bush, with a GPS collar around its neck that will allow its movements to be tracked.

“In the mid-1980s, there were only a few isolated specimens left here,” said Carlos Serrano who heads the lynx protection programme of the regional government of Castilla La Mancha in central Spain.

The mother of one of the lynxes, Lava, was part of the first Iberian lynx litter that was born in captivity in Spain in 2005 as part of the Life+Iberlince programme, which was launched in the early 2000s to try to prevent the animal from going extinct.

“We always feel great emotion whenever an animal is freed in the wild,” said Francisco Villaespesa, the director of the El Acebuche Iberian lynx breeding centre in southwestern Spain where Lava was born in April 2014.

With four breeding centres in Spain and one across the border in Portugal, the Life+Iberlince programme combines efforts by local officials, ecologists and the European Union (EU)to save the lynx.

The programme, which is financed mostly by the EU, has a budget of 34 million euros ($38 million).

Lynxes born in the breeding centres are monitored by webcams, kept away from humans and are taught how to catch wild rabbits.

Those that are good at hunting are released into the wild, the rest remain in captivity to be used for reproduction.

The efforts have paid off. The number of lynx living in the wild has more than tripled since 2002 to more than 300, according to the WWF.

Most Iberian lynx are in the Donana national park and Sierra Morena mountains in Andalucia, in Spain’s south, but the programme has reintroduced captive-bred animals to the regions of Castilla-La Mancha in central Spain, Extremadura in the southwest and Murcia in the southeast, as well as Portugal.

“It is easy for man to push a species to the brink of extinction. But it is much harder and costly to save it,” said Miguel Simon, the director of the Life+Iberlince project.